When you tell people you’re making yogurt, you sound like some sort of super-hippie. But why not make your own yogurt? It’s *super* easy (as you will see below), and it’s cheaper than buying it (its about 1/2 to 1/3rd the price of buying yogurt). It’s healthy. It encourages you to eat more yogurt, which is a healthy habit. And if you’re making yogurt, you might as well make some homemade granola to go with it.

The craziest thing about making yogurt is how simple it is. It’s mostly just milk!

You can even save some of the yogurt from the previous batch as the culture to start the next batch, though I’ve heard that eventually the strain won’t be strong enough to continue without mixing in some fresh stuff from the store. I can’t verify that.

I will admit that making the yogurt takes a long time, but it’s not really active time. It’s not like you have to do anything during that time. It’s mostly just a matter of keeping it warm.

The granola could have been a post in its own right. Of course it gives a nice crunch to your parfait, but you can use it for anything you might use granola for. Sara eats bowls of it with milk for breakfast.

It’s great. The kids love it. The thing about yogurt is that it is so versatile. You can mix in honey, vanilla, or jam. You can have it with blueberries, strawberries, or mango. You can use it to substitute for oil in baking. You can decide how much to sweeten it, and after doing this for awhile, you won’t be able to go back to the super-sweet, store-bought variety. What’s not to love?

And that’s to say nothing of the granola, which has a million uses itself, even above and beyond yogurt parfaits. Make it with almonds, make it with dried fruit. Throw whatever you want in there. Yum! 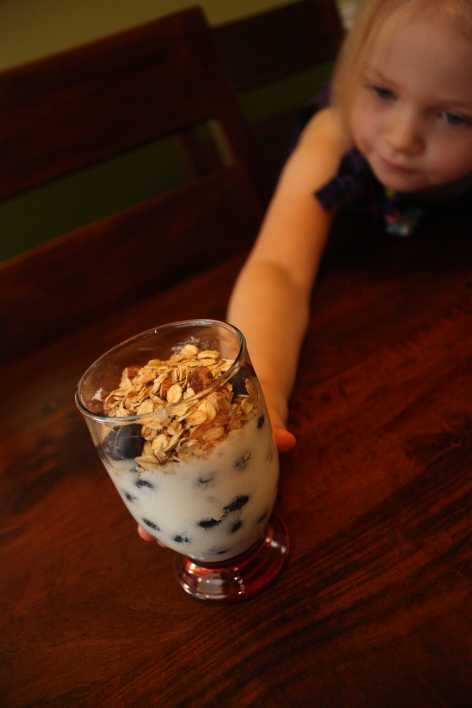 Plus, you sound impressive when you say you make your own yogurt. Nobody has to know how easy it is. That’s between you, me, and the public Internet.

This recipe is from Stephanie O’Dae’s A Year of Slow Cooking.

Maybe it’s because of the towels, which sort of force you to unwrap the thing like a present on Christmas morning, but it’s always something of a surprise / delight when you  get up to find yogurt in the crock pot! For some reason, it always seems like it’s not going to work. Maybe because it’s so easy…a little TOO easy!

This recipe is from Mark Bittman, although any recipe for granola is really more of a suggestion than a recipe. So I’ll give you his recipe, but I’d say we make it a little different every time (as intended!).

We usually don’t actually put in the dried fruit, since we are usually using this in yogurt parfaits. You can always throw dried fruit in when you’re going to eat it, if needed. Also, we find that the coconut really adds something. We’ve tried it with and without, but after not having it and then putting it back in, I don’t think we’ll go back to leaving it out!

We have also made the Spiced Granola from that page, which is the same as above, with the following additions: