I had to go to Washington D.C. for a week for a conference, so Sara and the kids decided to join me. This was absolutely wonderful, since it would have been a boring, lonely week without them! Plus it makes for a cheap vacation, since the hotel is paid for and I didn’t have to take any vacation.

It was a 13 hour car ride with the stops, and we did it straight, driving all the way there in one go. This actually went pretty well. I find that at the beginning of the trip it’s a lot easier because everybody is excited. In fact, we woke the kids up to leave early, something that both Sara and I remember fondly from our own childhoods. My dad in particular would always be itching to get going, sometimes just deciding the night before, “You know what? Let’s just leave right now and drive all night!” So I was kind of excited to share that with the kids.

As with the Maine trip, we put together a mixed tape (cd) to listen to on the trip, and it’s pretty awesome. We listened to it basically on a continuous loop the whole time (with only a few minor breaks for Frozen).

The first thing we did was go to Mount Vernon. That was actually really cool, and maybe the highlight of the trip! It was neat to see George Washington’s farm and house, including the room he died in and the room he was sitting in when he found out he would be the 1st president of the U.S. The reenactors were all top notch.

Evie has always really been into the sort of pioneer time period, probably going back to the Little House books, but also intensified more recently with all the American Girl books she’s been reading. She refuses to wear a hat, and instead wears a bonnet every day. She loves nothing more than to wear her bonnet with an old fashioned-looking flower girl dress that Sara had from when she was little. Knowing that we would be going to Mount Vernon, we secretly brought the dress along.

Evie was a big hit. Everybody we passed complimented her on her outfit, and the reenactors were very happy to see her. Even the General himself said she reminded him of his granddaughter. We tried to take a picture, but everybody loved the two of them so much, it set off a papparazzi storm of photography. I think ol’ George wasn’t sure who Evie’s actual mother was, there were so many people taking pictures. Evie was obviously very proud.

Strangely, though, Evie wasn’t the only one to be complimented on her outfit. Someone told Sara, “We’ve been traveling around quite a bit, and your outfit is the best we’ve seen on the trip.” Sara wasn’t wearing anything particularly fancy, but let me tell you, it’s a nice compliment from a stranger!

As we were driving through the confusing, traffic-laden hellstorm known as the beltway, I was trying to understand all the crazy HOV lane signs. They are really into HOV lanes in D.C.! I’m fairly comfortable driving in crazy traffic, as only someone who commutes about 2 hours a day in Chicago traffic can be, but I couldn’t make head or tails of most of the signs. Finally I saw something a Chicagoan could understand: an ez-pass only lane through the toll! Quickly I cut across several lanes of traffic, congratulating myself on figuring this one out. Or so I thought, because I was totally wrong.

What I actually did was get on a special toll road, just for me! Apparently they have special express lanes that charge your i-Pass for the privilege of using them. Everybody who knew what they were doing (i.e. everybody except me) stayed in the free lanes, since the traffic was flowing. So we had our own little private highway with nobody on it except us! I was a little nervous how much it was costing me (we went under a LOT of i-Pass readers!), but it only ended up costing like $3.50. Not exactly worth it, but not too bad.

The nice thing about D.C. is that all the museums and things are free (though they do try to charge you for whatever ELSE they can charge you for). The next day we hit up the zoo. The highlight was seeing 4 lion cubs, one of whom was very tentative, interacting with their mother, who had had about enough of that tentative son of hers.

It was super hot throughout the week, hovering in the high 90’s. Also, the hotel we were staying at through the week had a pool that was under construction, so no swimming for us (though we did swim at every other hotel we stayed at). Despite the heat, Sara and the kids made it around to quite a few things. They spent 6 1/2 hours at the Smithsonian Natural History Museum, but that was understandable, considering the kids’ love of butterfly houses. 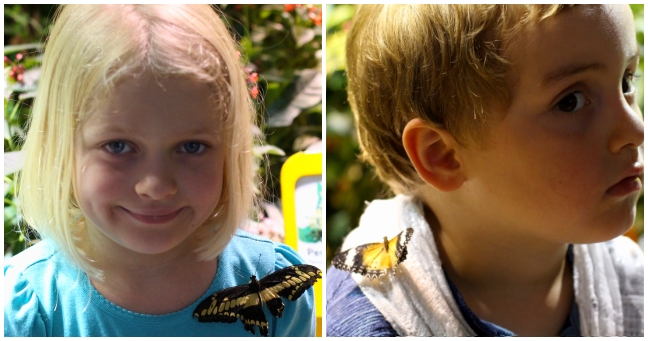 They also hit up the U.S. Bureau of Engraving & Printing (where they make money; the Mint is only for coins), which seemed to be a highlight. The National Museum of American History, Air & Space Museum, and the National Museum of the American Indian were all only so so. I was at the conference through most of those, though I was able to join them for the Native American Museum.

We also hit up some trendy restaurants that required us to make reservations well in advance. The best was Rasika, which was awesome. Founding Farmers was…disappointing. More on that in another blog post.

Oliver spent most of the week making friends. With EVERYBODY. No stranger was immune to his charm. The was especially true on the metro, when he had a captive audience. He would find someone to make friends with and start chatting them up.

Ollie, whispering: “Mama, can I ask for her phone number?”

They start so young.

Our final stop on the trip was Glen Echo Park, where we had a personal carousel tour and saw a Wizard of Oz puppet show. The kids were front and center in the first row, and it was cute to watch Ollie clinging to his big sis when the wicked witch puppet came out.

Finally, after driving all the way to D.C. and back, we hit an ENORMOUS pothole hidden under a puddle just as we got back into Chicago, bending our rim and busting our tire. It was quite the traumatic end to a long day, and just really not what we needed right then. So the whole thing ended on a down note, but the tire has already been repaired and replaced (though we ended up losing our hubcap), and, as they say, all’s well that doesn’t end well.