I don’t think of this as being a particularly difficult thing to make, but I guess when it comes to salad, it’s a little more difficult than the average. The original recipe says you can skip some or all of the “optional” part. You cannot. I will not allow it.

The nice thing is that there are a lot of different steps that don’t need to be done all at once. You can do the walnuts, go away for an hour, come back and do the raisins, wander away again, do breadcrumbs, etc. Also, you’re supposed to let it sit for awhile anyway, so no worries on making it ahead of time. We’ve even put the breadcrumbs in ahead of time, and they don’t seem to get soggy or suffer in any way. 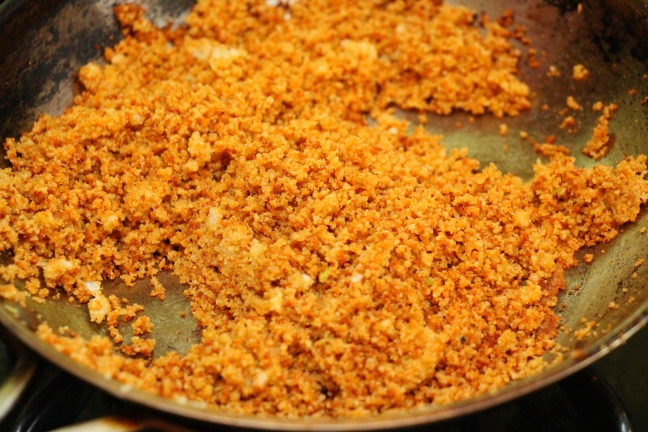 I do not get sick of this salad. It’s got everything; it’s tasty, unique, healthy, has a good texture, the works. It’s one of the best things I know how to make. We’ve taken it as a dish to pass for Thanksgiving, a school potluck, and a New Year’s Eve party. I don’t know anybody who’s tried it and hasn’t liked it.

I should note that we substituted pepitas for the walnuts, since the school potluck was a nut-free event, and it was absolutely just as good.