Obviously this is a pancake sort of blog, but *eeeevery once in awhile* I might eat something else for breakfast (shocking, I know). And when I do, there are no better accoutrements than hashbrowns and bacon.

(This is, however, a bacon sort of blog. No exceptions)

Regular hashbrowns are pretty amazing. I mean, I wouldn’t have thought you could improve on hashbrowns. But you CAN and now you MUST.

Usually I make hash browns in a pan, but then I get entirely too impatient to eat them, so I don’t let them fry long enough to actually get crispy. Instead they end up as kind of warm, mush potatoes, that are still delicious. Intellectually I understand that they would be better if I could wait for a few more minutes, but…

However, imagine you could make ENTIRELY CRISPY hash browns, with no effort?!? And since they’re in the oven you don’t even have to sit there and look at them, waiting for them to crisp up but growing increasingly more impatient.

As for the bacon, I have cooked a slice or two in my day. Usually the grease is flying everywhere, burning your hands like liquid magma as you try (unsuccessfully) to flip the piece over with a fork. Then it starts curling up, so you try to hold it down, but it doesn’t work so you end up with one side that’s crispy and the other side that’s just like raw fat.

No more. This is going to change your life my friend.

It is so unbelievably simple, you end up with perfectly cooked, flat pieces, and you don’t even have to stand there and shepherd it the whole time. Set it and forget it. The strips are actually less greasy too, since most of it stays in the pan. AND! AND! It’s easier to clean up: just wait until the grease congeals a little bit, crumple the parchment paper, and throw it away.

Sometimes you really can have your cake and eat it too. And the best part is that you can cook it in the oven AT THE SAME TIME as the hash browns! 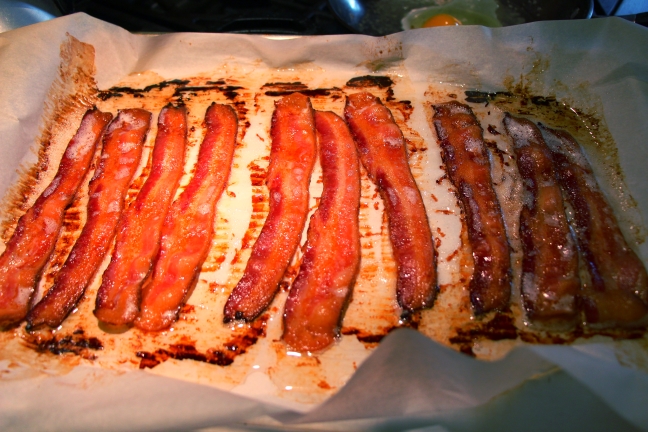 The one slight knock I would say is that I am a crispy bacon kind of guy, and you can’t *quite* get the bacon to that perfect level of crispiness. However Sara, who claims I always overcook the bacon, is quite satisfied (and honestly this is probably somewhere in the middle between us as far as our preferred texture).

Still, that is a very minor complaint, especially when weighed against the obvious advantages.

I have no knocks against the hash browns whatsoever.

And naturally, it is Alex approved, so what more could you ask for? 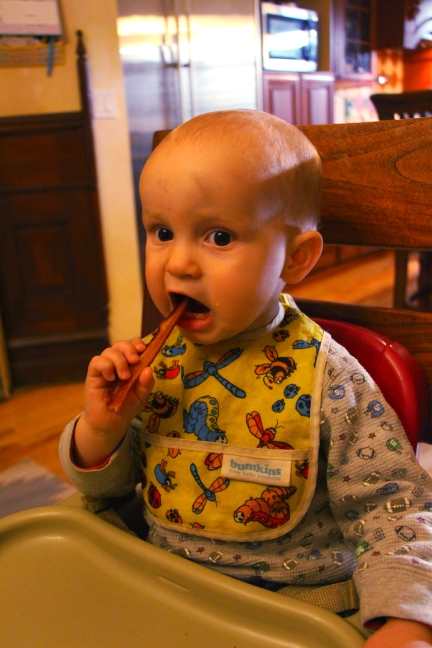 Recipe (is this really a recipe?) from The Pioneer Woman.