I haven’t had a post yet about the garden this year, but it’s going as strong as ever. Lots and lots of tomatoes (15 maybe?), as well as kale, swiss chard, strawberries, and two extremely under-performing basil plants.

There is also some mystery squash / pumpkin / cantaloup / the Audrey II slowly exploding out of / taking over the chard. We didn’t plant it, but it seemed too big and healthy to pull. A little TOO big and healthy at this point, but we might as well see it through.

In addition to the garden, we added an additional “garden annex” in the parking lot out back. This one is mostly maintained by the kids, who planted everything, keep it watered (more or less), and eat the peas. Evie’s in charge of the pots, and Ollie is in charge of his “box”, which was made by Grandpa Ron as a birthday present.

Ollie had two specific things he wanted to plant in his box. His “flowers” – bachelor button seeds given by Lisa that he’s been dying to plant for years…

…and his pumpkin seeds. Last Halloween, Ollie dismantled several pumpkins at school and saved approximately 200 pumpkin seeds in a box for MONTHS. He was so excited to plant them, but I thought there was *no way* that they would grow. Until, sure enough… 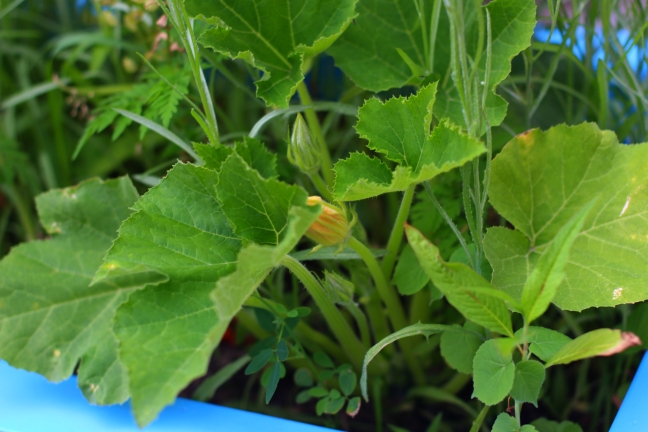 Unfortunately, the strawberries were really popping while we were on vacation, so we mostly missed out on those. However, we did get enough from elsewhere for Sara to can more than 20 pints of strawberry jam. We also did some mulberry jam, so if you were planning on poaching mulberries from around the neighborhood, too late!

With our jam supply secured for the year, we now wait in hopefull anticipation for all of those tomato plants. Next up, salsa!