Well, we made it out on our first camping trip of the year. I have to say, things could have gone better.

The Haven was still partially underwater. The water wasn’t nearly as bad as when we were there a couple of months ago, but the fact that any was there at all is a bit troubling. The first time it was forgivable because it had been raining cats and dogs for quite awhile. This time, however, it hasn’t been particularly wet.

Unfortunately, as we guessed, the raspberries seem to be kaput. That was a big bummer, since that was one of the fairly major projects of last year. More generally, it’s kind of a bummer that there’s so much water around everywhere, making it difficult to get around and sort of unpleasant to contemplate living there at some point. Especially since all of that standing water lead to the inevitable conclusion – mosquitos. 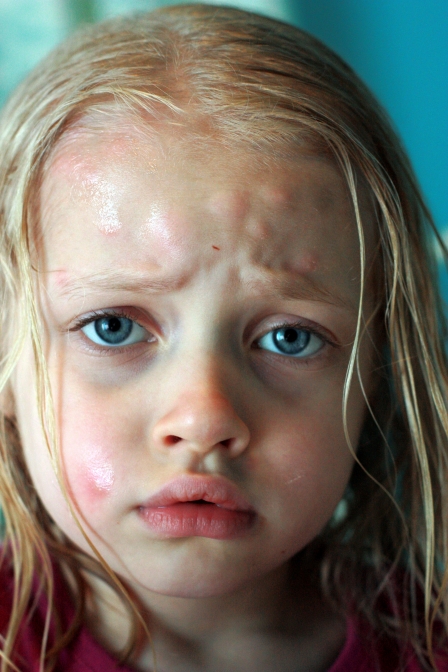 It was unbelievable. As a person who has done a lot of camping, I’ve never seen anything like it. The clouds of mosquitos were so bad that it was almost like you had a hard time seeing somebody through it. I cannot imagine there is enough wildlife up there to feed that many mosquitos, which means they were just that much more hungry when we got there. The picture above really does not do it justice AT ALL.

Oh, the poor kids. The poor, poor kids. I feel like such a bad parent even telling you. Even covered with bugspray, pants, and sweatshirts, the kids were all but carried away by the buggers. Their poor, sad little bodies are covered head to toe. Ollie’s left hand had so many bites on it that it was swollen like a sausage, and he couldn’t flex his fingers. His ankles were so bad, he had trouble walking. He’s got 5 or so that actually turned into big, white, swollen blisters and popped. Evie absolutely looks like she has the chicken pox.

Between that and the extreme lack of sleep, moods were pretty foul by Sunday, and we left hours before we had planned. Since we had gotten there so late on Saturday, we were only there well short of 24 hours. I still think it is safe to say that it was the most miserable less-than-24-hours of Evie’s life. I’m actually worried that she’s been soured on camping altogether, she was so miserable. Both children had to get up for benadryl in the middle of the night just to make it to morning.

The worst part of the whole thing is that I am relatively untouched, which make me feel a little guilty. With 3 tasty morsels around to snack on, I was distinctly less appetizing. My secret? When nobody’s looking, I quietly release a little mosquito repellent in the air, like one of those Glade air fresheners. Halbach brand repellent – absolutely repellent since 1980.

The one good news is that I was finally able to get around most of the property and hang the “no trespassing” signs back up. 3 sides are good to go, and the 4th is maybe a 3rd of the way done. I found every sign except 1, and they are much more secure this time, so hopefully they don’t just keep falling down again. It was somewhat depressingly difficult to find the signs, downed or otherwise. Isn’t it kind of half the point that someone can easily see them?

It’s especially depressing knowing that I sacrificed my kids to the mosquito gods, just to re-hang some invisible signs that will probably just fall off the tree again.