In preparation for Evie’s Halloween costume, I made her a scrappy tutu.

This was really supposed to be Sara’s project. She found the tutorial and picked out all the fabric. However, she has such a massive backlog of projects that she asked me to help out. I probably would have helped in any case, but when she said it was for Evie’s Halloween costume, she knew she had me.

My family was always big on homemade Halloween costumes. They’re such a great opportunity to let your creativity fly. I really just don’t see the point of buying some costume off the rack and tossing it on your kid. Why even have a costume? What’s the point? It’s not like people are going to deny your kid candy if they’re not wearing a costume, not to mention that the costume is usually covered up by a coat anyway, so you might as well just send them out there with nothing on. Otherwise, you’re just making a donation to costume manufacturers. The fun of the costume is in the imagining and creating.

Suffice it to say, I’m keen on making Halloween costumes. Even still, I was just planning on helping out a little bit, maybe cut a few pieces of fabric or whatever. However, as I got going I realized, “Hey, I can do this thing.”

So I made a skirt. A skirt, as it turns out, that’s perfect for twirling… 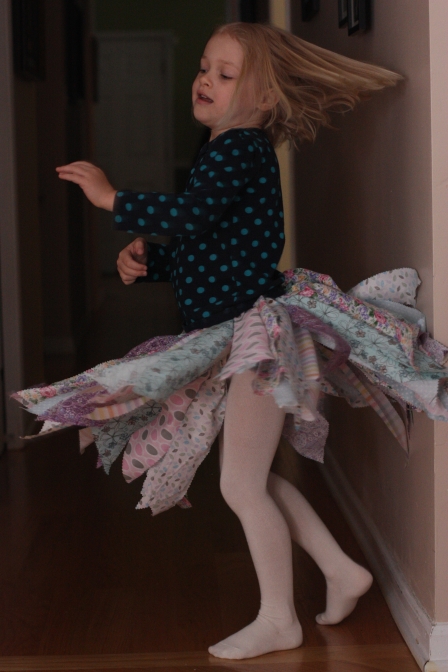