Over the summer, Evelyn asked me to knit her some new mittens. When we were on vacation, we stopped into My Sister Knits in Fort Collins, and Evelyn picked out some super pretty (and super on sale!) yarn.

Our original plan was to put flip-over mitten hoods on them like my gloves, but they came out really nice. Evelyn was so happy with them, she decided to keep them as-is so she could wear them inside!

It’s been a while since I’ve had a knitting project, and it was nice getting back into it. It is certainly is much nicer to make things for people when they really like them!

So…I started this post 3 months ago, with the idea of showcasing the baby things we knitted in preparation of Alex’s arrival. Somehow I only managed to do a post about the sweater *I* knit, but never quite highlighted all of the things that Sara knit.

Just to prove how late I am in posting this, the astute among you will probably notice the one in the middle is no longer necessary since Alex ended up being a boy. And in fact it is already out of date, since Sara has knit some additional things since Alex was born (I guess that can be a future post!)

Many of these things have shown up in pictures already, such as the outfit Alex wore home from the hospital, and others have not, even though Alex wears them quite frequently.

The blanket is certainly the highlight, in my opinion. It is one of the most beautiful and unique blankets I have ever seen, and if anything, it looks better in person. Definitely a great keepsake, as baby blankets should be.

Sorry it took me so long to get this one up! Better late than never!

I have knit my very first sweater!

Okay, so Sara says that picture might be misleading, so here’s one with a dinosaur, for size:

Alright, alright, so it’s a baby sweater. But still, a sweater’s a sweater, right? 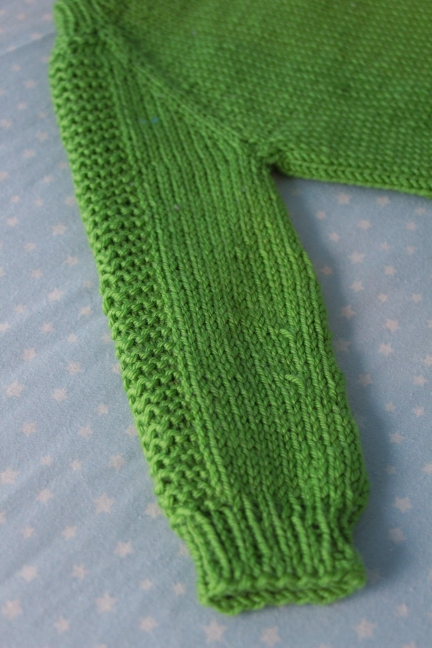 I think my knitting has improved at some point without me realizing, because this was actually pretty easy. Plus, it gave me something to do every day on the train. That’s right, I was that guy (hey, it was less weird than the lock!) I was a little nervous about finishing this in time, but it turns out I needn’t have worried. 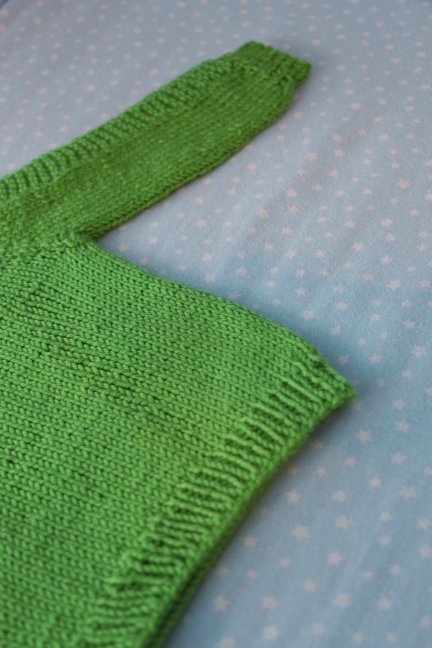 I will certainly add an “in-use” picture when applicable!

Guess who’s got himself a pair of badass accordion gloves? 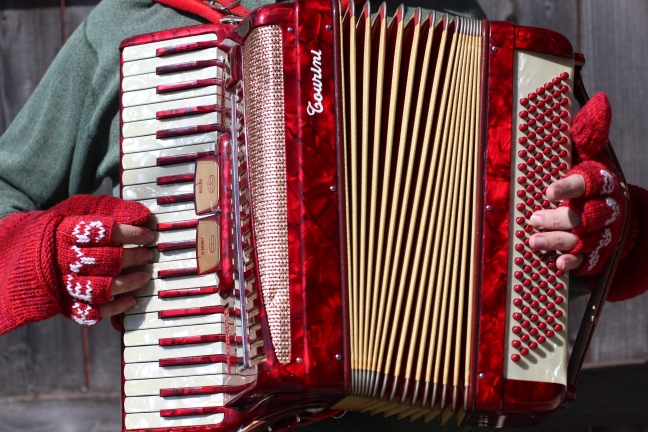 As a knitter, I feel like I should have something on hand (see what I did there?) to show people. Almost like a sample or something, like credentials, as if I need to prove that I’m not lying about knitting (because that’s totally what you would lie about to be cool, right?). However, as a person married to a knitter, my hats and scarves have all been provided by Sara. “Oh, did you knit your hat?” they ask. “Well, no. I mean, I could have. I do knit hats, sometimes, but not this *particular* hat…”

No, I needed something of my own.

And hey, if you’re going to go custom, go all the way custom, am I right? 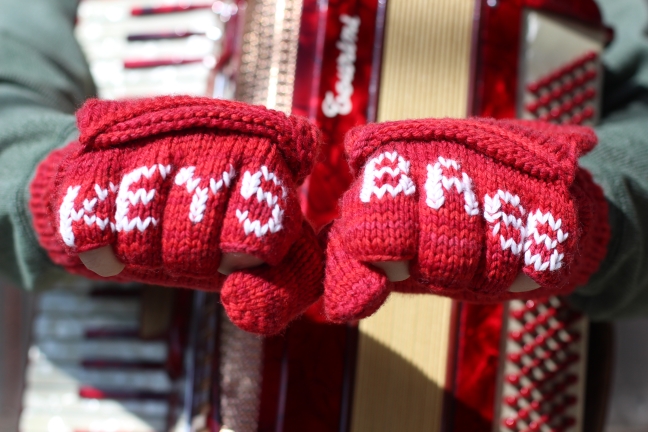 So I made myself some “convertible” gloves, that can transform from fingerless gloves into mittens with the flip of a flap. There are even little flaps for the thumbs! 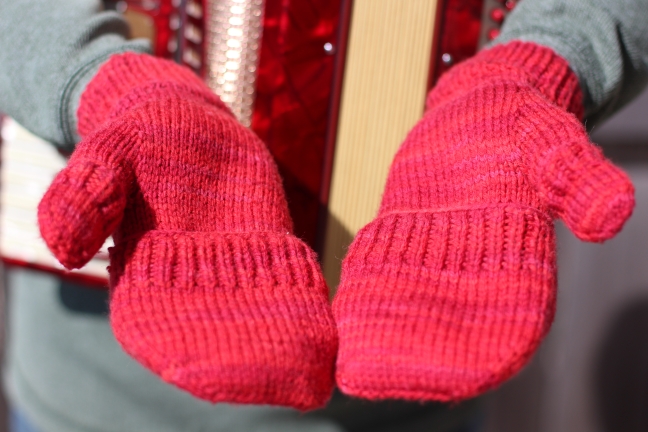 As I was picking out the pattern for the gloves, I saw some with embroidery on the knuckles, and I knew I wanted to do that. But what message to put? Something badass, something awesome, something uniquely me, and something no one else would ever have in a million years.

Look, I’ve even got a picture of me working on my mittens in Costa Rica. Mittens! In Costa Rica!

Now, I will admit, knitting these mittens has taken all the time that I would normally use to practice the accordion. But, hey! Now that I have the accoutrements, fame and fortune can’t be far behind, can they? If nothing else, at least I’m prepared for some winter busking. 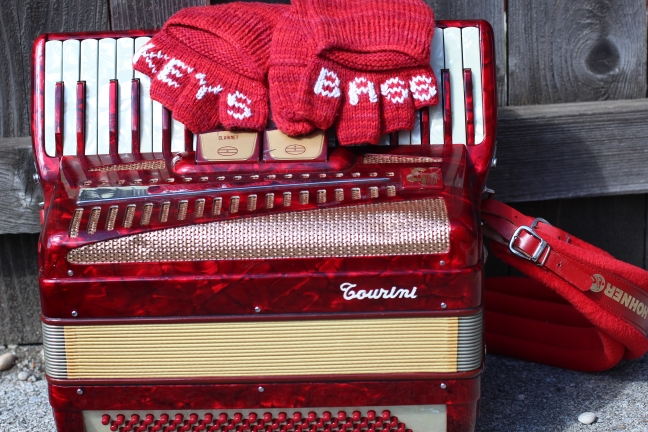 We make a lot of jam. I mean a LOOOOT of jam. Our pantry is stocked with apocalypse-preparation levels of jams, marmalades, curds, chutneys, and compotes. We have an average of about 5 open variety of jams in our fridge at any given time. Short of Frank Smuckers, there are not many people who have more jam on hand than us.

And none of those jams, none of them, are better than balsamic strawberry jam. 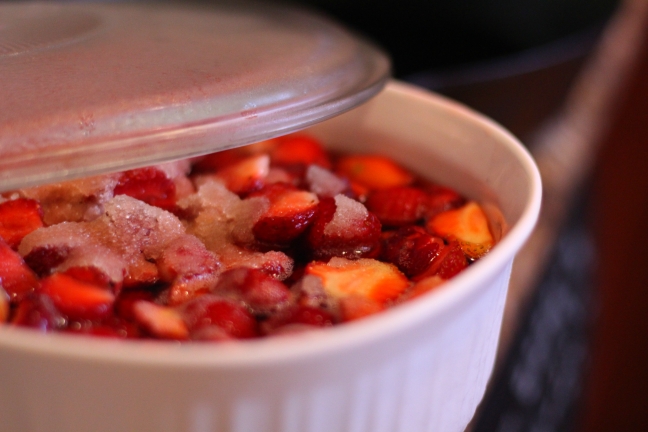 It all starts with the fresh strawberries, of course.

Although Sara does most of the canning, it is something of an “all hands on deck” situation. The kids do seem to honestly enjoy the fact that they get to help make the food (although, it’s possible they are just humoring me). Especially something as delicious as jam. 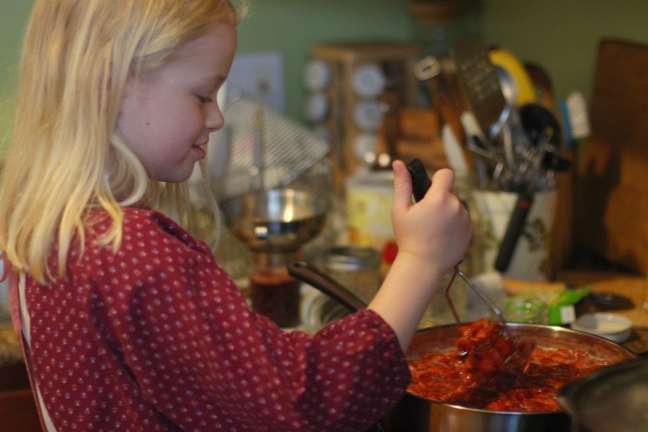 Now, I know what you’re thinking: balsamic vinegar in jam? That sounds absolutely disgusting. Why would I want to pollute something as simple and delicious as strawberries and sugar with balsamic vinegar?

But you do. Oh, how you do. I’m afraid you’re just going to have to take my word on it. I’m something of an expert, you know.

Use it on whatever you use jam on, but also try it drizzled on some vanilla ice cream. Heavenly.

Naturally, no recipe is complete without the secret ingredient: one photobomb. 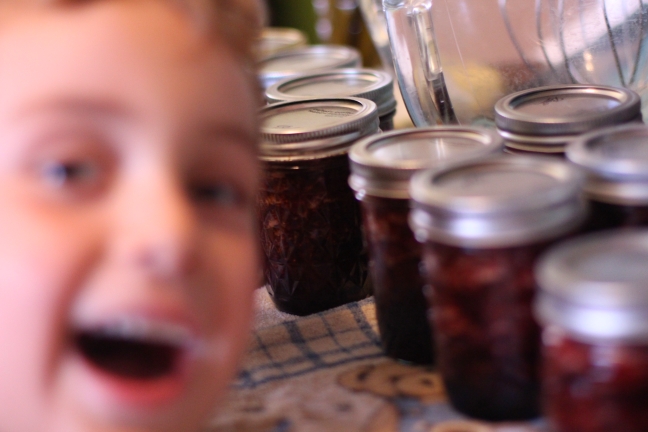