Honestly? I think the reason was that we were looking for a recipe to use up ground pork. But this recipe is so good, you’ll definitely want to buy more ground pork, which leaves you more ground pork left overs…it’s a vicious circle.

Have you ever really smelled white pepper? Go smell it and come back. I’ll wait.

Okay, yes, it smells absolutely odious, but does it smell familiar to you? Because everyone around here agrees that it smells exactly like a hog farm. This is not a positive. I can barely bring myself to put it on my food. And yet, this dish is delicious. Maybe you need a little hog farm for the pork, I don’t know.

Schezuan is Chinese for “melt your face off”, or so I assume, because Schezuan food is spicy! This dish is no exception. I suppose you could try to make it less spicy, but honestly I wouldn’t bother. It would really take away from the dish. Serving it over rice helps with the heat a little bit, but if you have trouble with spicy food though, maybe you should avoid it.

So yummy and so easy to make.

One word of warning though; do not buy Trader Joe’s soy sauce! I love Trader Joe’s, but we made that mistake and we’re still paying the price. We have to mix it in with Kikkoman a little at a time to get rid of it. 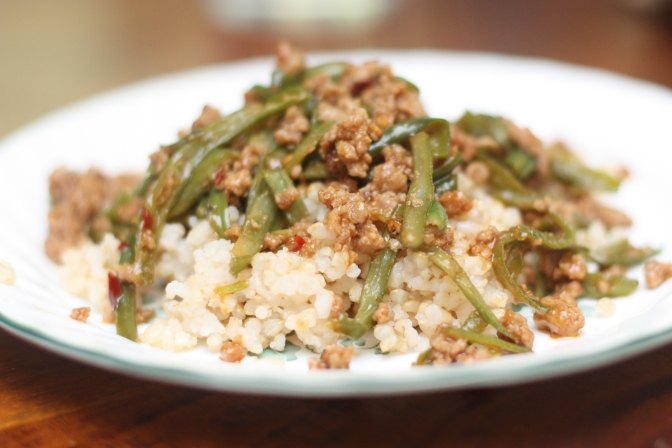 I must admit, I am not a big fan of traditional green bean casserole. Actually, I am not a fan of cream-of-anything soup, which is what mars the green bean casserole for me. We’ve had this recipe for a long time, so I don’t remember exactly how we got it in the first place, but it is awesome, and I think everybody who tries it likes it. And those who don’t are probably filthy Communists*.

*I don’t actually believe Communists are any filthier than Capitalists. I meant to say filthy hippies**.

**Even though hippies do in fact tend to be filthy, how about we say “earthy” instead of “filthy”? Earthy hippies. Even hippies would be happy with that one. Except for the fact that earthy hippies would probably enjoy Green Bean Un-casserole.

This is just flat out delicious, however, some people see green beans and artichokes, and they won’t even try it. So, in order to prove to you how delicious (and un-healthy) this is going to be, I’m going to show you a picture of Sara drizzling oil over garlic and cheese:

Aw, what the heck, let’s throw some butter on top too.

Are you with me now?

This is soooo good. I could eat it by the gallon. It was probably the best part about Thanksgiving, which is a holiday entirely centered on delicious food. In fact, it was so good, that we ended up making a second batch the next day!

The other nice thing is that the recipe is easy to scale up. So if you need to serve it in large quantities (such as for Thanksgiving), you can easily just double or triple the recipe. Or quadruple it and eat it all yourself!

I’m not sure where this originally came from, so I can’t credit the source. Sara changed it a little over the years, so I’m not sure how much it even resembles the original recipe.

Combine 1st group of ingredients in casserole dish. Top with dots of butter and salt and pepper. Bake covered for 20 min at 400°F. Top with onions and bake uncovered for 15 min.