The initial estimates for Covid-19, if left unchecked, were around 1.4 million deaths in the United States; the total cumulative deaths in the US from ALL wars, all the way back to the Revolutionary War, is about 1.35 million*. Even though we are no longer looking at that worst case scenario, the fact that this had the power to kill more people than every war combined is really messing with my head right now.

It does not take much imagination to think we might exceed the US death total from World War I (116k).

I think about those wars and what a profound effect they had on the US, and on the world. Titanic shifts that changed everything about our country, our politics, our industries…we are currently experiencing something that is potentially several times larger.

*Numbers come from here; I am using the Total US Deaths number, rather than the Total US Casualties number, because those numbers also include the wounded.

So, we were going for a walk the other day, with Alex on his balance bike, and we chanced upon a recently dead cat on the sidewalk.

Death has been on Alex’s mind a lot lately. He will routinely say things like, “I don’t want Mommy to die!” or “Why do we have to die?” I remember the other kids going through a similar stage at the same age. But kids are so funny about death: they don’t have the same hang ups and baggage that us older folks do.

For example, as we were passing the cat, and Alex was pondering life, death and the mysteries of the universe, he said to me, “I’m going to drive over it with my bike!”

Now, this went around and around for a bit. He REALLY wanted to run over that dead cat with his bike! So finally Ollie stepped in. “Great,” I thought. “Maybe Ollie can talk to him kid-to-kid. Get him to understand why we shouldn’t drive over dead cats.”

Ollie: “Okay, so, imagine if Evelyn was dead and she was lying on the road. Would you drive over HER with your bike??”

That is…not how I would have approached the subject.

Alex thought about it for a bit and then said, “No, I wouldn’t. But…” I could tell he was still struggling with it a bit – he felt like he still had an argument to make – but he couldn’t escape that kid-to-kid logic. And anyway, by that time I had coaxed him down the street a bit, so riding over the cat wasn’t feasible anymore.

I warned Sara about this because I knew it was bound to come up again, so I wanted her to be prepared. (Oh, that and the fact that she was going to have to walk by that dead cat on the way to work.) So tonight, Sara decided to broach the subject and see if Alex had any more to say about it. You know, work through his complicated feelings on the subject? Maybe he had some feelings he needed to work out?

Sara, while stirring food in the crockpot: “I saw that dead cat…”
Alex: “Did you cook it?”

So who else got a collage made out of obituaries?? 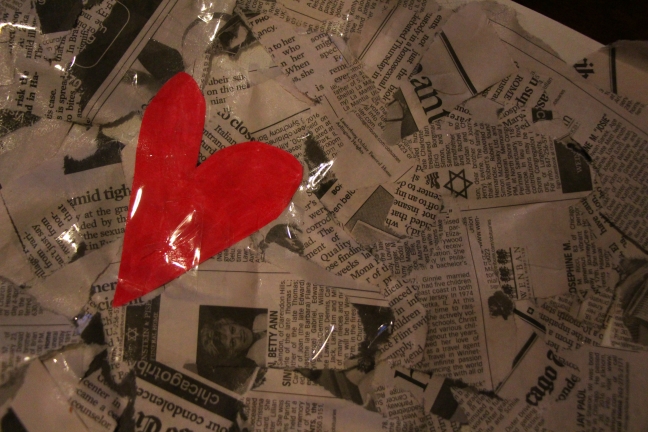 I’ve been struggling all week with what to write about Uncle Billy. Not because it is particularly difficult emotionally speaking, but because I just simply didn’t know what to say. I would open a blank post and stare at it for awhile, before closing it and making my mind up not to write anything, only to change my mind and stare at it some more later. Rinse, repeat.

It seems like it’s not my place to say anything; there are other people closer to him that will probably say it better, or have more of a “right” to remember him. On the other hand, once I thought about it, I realized I probably saw him more than most of my dad’s brothers and sisters, seeing as he lived with Grandma, so we’d see him whenever we’d stop by.

Finally I decided not to write anything.

…until I was on the way home from the funeral today. It’s weird to say, but it was a really good funeral. It wasn’t a religious funeral, but it was more of a…I don’t know. A storytelling festival? A celebration of life? A bloodletting? It wasn’t a ceremony as much as just people letting everything out. Good times, bad times, talking about things we don’t normally talk about. Talking about the dementia at the end. It just seemed like exactly what everybody needed.

To me, the quintessential Uncle Billy memory is the Price is Right tape. I’ve watched the video so many times that I’ve memorized it, but there’s a part when Grandpa gets called up and it cuts to Grandma and Billy in the audience. I don’t know how old Billy is, but he is so ridiculously young (and thin!), that you can hardly recognize him. He’s cheering and whistling wildly, and Grandma is just tugging on his arm telling him to sit down and knock it off.

I don’t know why that’s the first thing that comes to my mind, especially since I’m pretty sure it happened before I was born.

Okay, so that’s a stupid story (except the part about how awesome I am that I went to a Marky Mark and the Funky Bunch concert), but I think it does really represent my Uncle Bill. I’m sure he had zero interest in seeing Mark Wahlberg rap, but if there was something he could do for you, he would do it.

I remember when Grandpa died, they had a flag ceremony and some other military trappings at his funeral. I remember thinking how odd that was; my Grandpa almost never spoke of his time in the service. It seemed distant, not really a part of him, and so it seemed weird to include it.

Uncle Billy was the opposite. The Air Force shaped his life, and was a defining characteristic of who he was. I think those were the best, most important years of his life. Therefore, the military part of the service was just so moving. When they handed Chris the flag and thanked Uncle Billy for his service, it really meant something. I know it would have meant so, so much to Uncle Billy.

I think if he were watching today he would have had a big old smile on his face, and for once, he might not have had anything to say.

My grandma died on Thursday.  It wasn’t totally unexpected (death never is when you’re 88), but it was less than a month since she was found to have colon cancer, and she sounded good when I talked to her Tuesday morning, as she was about to eat for the first time since surgery the week before.  Shane asked me to write a little something for the blog, since I might have more to say than him.  I, however, am typically a writer of few words.  Anyway, I will try to tell a few things. 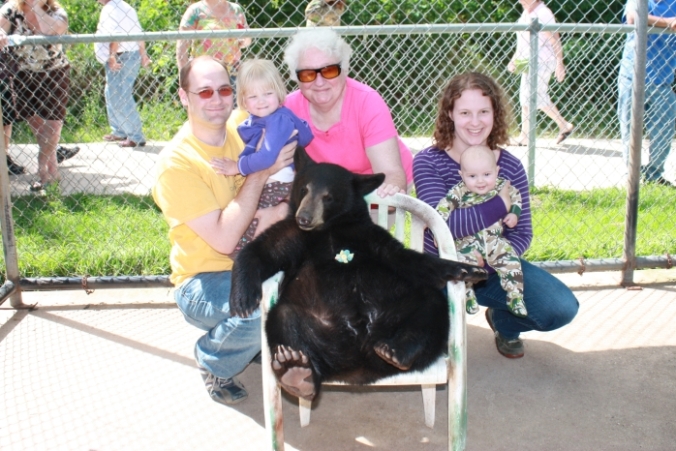 She loved bears.  I’m not sure why, but she always claimed I had something to do with it.  (I think I had to change three words from the present to past tense as I was writing those two sentences.)  She bought bears all the time, and people gave them to her as well.  I know other people with collections like these, but seriously, none of them top hers.  She would give talks about her bears at mother-daughter banquets every spring.  She always wore some kind of bear shirt or earrings.  She gave gifts of bears.  (Both of my kids sleep with bears as large as they were that were given to them by grandma as babies—Evie’s is even missing one of the eyes!)  I think she has some sort of written document with each family member getting at least one of the bears, and I think she had found a charity that was willing to take the rest.

She loved caffeine-free diet pepsi.  Ewwwww.  Her burps always smelled like caffeine-free diet pepsi.  Double ewwwwww.  I’m not trying to be irreverent, but I think scent is one of the longest-lasting memories and that is totally what I think of when I think of her.  Seriously.  Other junk foods she loved include: cheese/crackers/bologna/summer sausage, bugles, dry roasted peanuts, and those donuts rolled in crushed peanuts.  She always made a cheeseball or baked beans for any potluck.

I loved playing cards with her.  One of my only memories of my grandpa, her husband, involved staying at their house and playing kings in the corner then realizing we only had half a deck.  I usually stayed at her house from Christmas to New Years every year (the first year returning home early due to the arrival of a little brother).  We pretty much played cards the entire time.  She went camping with us every summer, and each year she and dad would teach me a new game.  After kings in the corner, there were spades, hearts, hands and feet, spite and malice (best card game name ever), pinochle (usually played 2-handed), cribbage, and euchre (roughly in that order).  I am a card shark (I’m guessing I take after grandpa on this), and I think she was really proud that her little granddaughter could beat her at cards.

P.S.  I played hands and feet Saturday night.  I tried to shuffle the spots off them, as usual.  And I won. 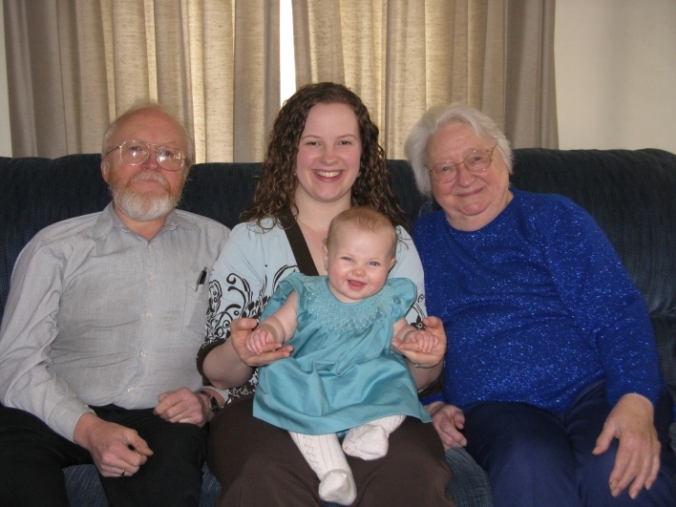 Lois, age 88, of Alma, MI, passed away at MidMichigan Medical Center-Gratiot on Thursday, August 30, 2012, surrounded by her loving family.

Lois was born in Breckenridge, MI on July 20, 1924 to Bruce. and Beatrice. She was a member of the St. Louis First United Methodist Church and the Oddfellow/Rebekah Lodge. For many years she worked as a cashier in Giant Supermarket, Alma. She was known as the “Teddy Bear Grandma”, often sharing her collection of well over 1000 teddy bears for all to enjoy.

Preceding Lois in death were her husband, Alfred, and two brothers, Donald and Robert. Lois was a wonderful person and will be missed by all who knew her.  Memorial contributions may be made to the St. Louis United Methodist Church.