Another cold and rainy Halloween, but we managed to survive it (at least there wasn’t hail this year!). We were back home and eating chili before dark, and ended the night cuddled up under blankets on the couch for candy eating and Nightmare Before Christmas. 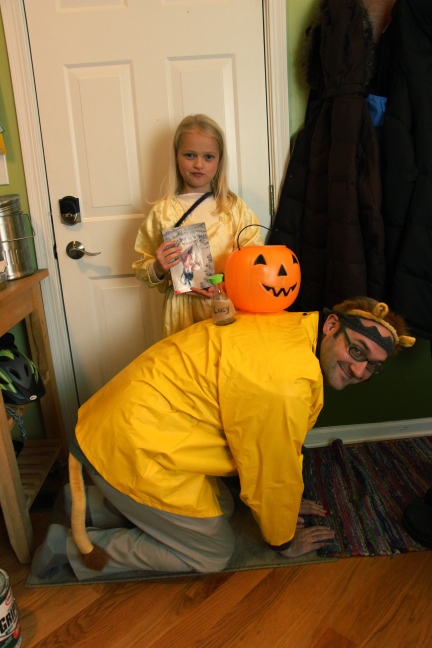 Lucy and Aslan from the Chronicles of Narnia

Lucy, a skeleton, (a skeleton!), and a pumpkin (who didn’t have his eyes open in a SINGLE PICTURE).

Evelyn has vowed that next year she will be something that nobody has to ask about. It’s a shame that she ended up not loving her completely homemade, completely amazing Lucy costume. I loved it so much, but it’s just hard to compete with the awesome store-bought costumes these days, and 2nd graders are apparently not into the literary costumes.

And if one more person asks her if she’s Belle, she’s going to put an arrow between their eyes.

AND NOT USE THE HEALING POTION.