We took a little bit of an extended weekend last week and took a quick trip to visit my sister in Indianapolis.

Let me first start by saying that this is probably the most I’ve ever enjoyed my sister’s dog Luna. I love dogs, but I often don’t love that particular dog. My kids are usually terrified of Luna, and I can’t blame them. She towers over them, and it is very easy to get accidentally scratched or knocked over in her exuberance, to say nothing of slobbery smooches all over your face. The anxiety of the kids kind of rubs off on me. However, this time wasn’t so bad. I don’t know if Luna is calming down as she gets older, if my kids get less anxious as they get older, or maybe it was just being in Luna’s own environment, which was less stressful for all of us. In any case, I think everybody enjoyed Luna a little bit more this time.

Of course, the main thing to do in Indy is go to the Children’s Museum. It is *exhausting* going to that place. It’s so big, and there’s so much to do, but it takes a lot out of you. 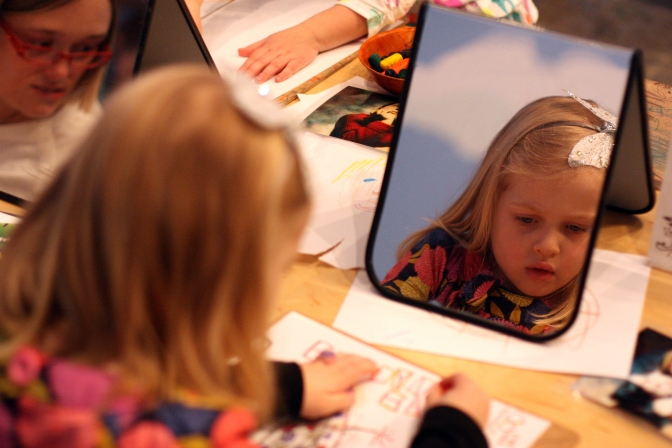 And we all enjoyed reproducing “American Gothic“:

Sorry Rachael and Matt, I think Sara and Ollie did it best:

Probably the most exciting thing for me was getting a chance to play Carcassonne. This is a board game that I have heard a lot about, but never had a chance to play. I have to say, it lived up to the hype. There is a lot of strategy, and I can see that each game would be a little bit different. It has a lot of things in common with other games that I like, with no obvious downsides (and you can play with only 2 players!). Plus, I won, so definitely that game is awesome.

The other best part was the awesome chocolate covered cherries Rachael made for me, which were the best I’ve ever eaten, homemade or otherwise. Therefore, I promptly forgot them in her refrigerator.

Evie found time to absolutely massacre Rachael in checkers, and we played a lot of hide and seek (and lots of hide Luna’s treat).

We took a leisurely Monday getting home, with several stops along the way including a stop at Purdue. The kids were pretty excited to see where Sara and I met, lived, and got married, and I enjoyed my trip to the APO office. I’m not sure why I get such a kick out of dropping in there, but it’s fun to see a place where I spent a lot of time, and to look at all the names and pictures of people I haven’t seen in a long time. It sure helps to have a friend of yours be the one in charge of the yearly scrapbook when we were pledging. Sara and I are well represented. And yes, I bragged to my kids about all the plaques with my name on them. (And yes Nathan, I showed them how you won the Friendship Award 6 times, no need to bring it up again in the comments!)

The only black mark on our trip was totally our fault. We 1) forgot Ollie’s face steroids, and 2) didn’t bring Evie’s inhaler. This directly resulted in Oliver having a massive, itchy, sore face eczema outbreak, and Evie developing a reoccurring wheeze and cough. And with Evie having breathing trouble, this also lead to a pretty rough night of sleep for the 4 of us, which never helps anything. Sara even asked me if she thought we should bring the inhaler, and I said no. Lesson learned. The problem is that, even with the proper medicine at home, if you don’t nip these problems in the bud, it takes some time to get them back under control.

All in all a good trip though; hopefully Rachael and Matt enjoyed hosting us as much as we enjoyed being there (probably doubtful).