Over the weekend, we spent a good chunk of time at the Holiday Fair at Evie’s school, and we had a blast. Both Evie and Ollie agreed that it was one of the best days of their lives.

Sara was on the committee again this year, so she spent literally all day there, from about 8 a.m. until about 6:30 p.m. We didn’t arrive until about noon or so. The weather was a little crummy, scratch that, a lot crummy, being generally rainy and cold all day, but it didn’t put a damper on the mood.

Sara was busy selling raffle tickets and Evie basically ran wild with her friends all day, which left Ollie and me to take full advantage of the festivities.

This started with the “fairy house”, wherein children trade items from nature (we brought feathers and shells) for tiny gifts. Both kids loved it and went many times, but Ollie is young enough that it was especially magical for him. I’m pretty sure he thinks there really was a fairy in the house.

We followed this up with listening to some great music while we ate lunch, watching the ice sculpting, and a marionette show. Afterwards, we checked out the crafts, and Ollie put together his Picasso-esque, but carefully crafted reindeer ornament:

Around this time, we were in need of some more sustenance, so we hit up the homemade pretzel window. I’m telling you, we ate a lot of good food that day, but that warm pretzel was just the perfect thing at the perfect time.

There was a petting zoo, but actually that wasn’t so great. Nobody was tending the animals, and the miniature horse was a little out of control. He was chasing the sheep and goats around, biting and kicking them, and generally riling them up. Since they were in a small area they were causing quite a stir and the children were afraid to put their hands in. Ollie did manage to pet the sheep a few times before I made an executive decision to check something else out.

Oh yeah, did I mention there were vendors there? That too.

There were also pony rides, and I knew Oliver would be all about those. He took a pony ride at the zoo over the summer, and he still references his pony by name (Gayle). Predictably, he loved it, and so did Evie.

This pony’s name was Spanky, which is apparently about the funniest name in the universe as far as kids are concerned.

One of Oliver’s favorite parts was making a candle in the traditional “dipping” style. Basically you just walk around in a circle, dipping the wick over and over again into the wax until enough of it builds up to make a candle. I never would have guessed that this would have any interest for Oliver, but he loved it. He did not get bored with it and he did it all perfectly. In fact, his candle turned out a lot better than some of the older kids. I didn’t see anybody as young as him doing it. He was so excited about his candle that he refused to let it go, gripping it in both hands and insisting on taking it to the car for safekeeping himself.

The tree was lit with nightfall and we had a round of caroling (followed by a second round inside while we ate dinner). 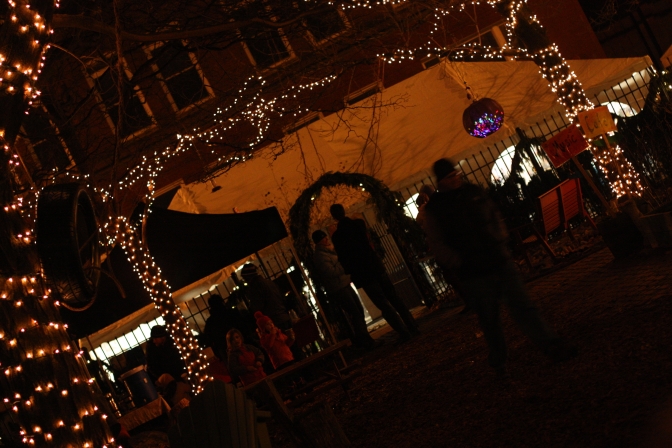 For dinner we had homemade tamales and a  yummy brat with sauerkraut.

Somehow Evie and a few friends got recruited into selling raffle tickets (I believe self-recruited would be more accurate), and they probably sold as many tickets as Sara. It’s a lot harder to say no to a kid, and Evie in particular was not going to let anybody go without a ticket in their hand. Of course, I missed Sara’s big moment with the raffle, since Oliver chose that moment to poop his pants on my lap. This is not something that he does often, so I guess I’ll chalk it up to the general overwhelming excitement of the day, but needless to say, I was not too thrilled with this.

Finally, the day was at an end, and between the running around all day and the cold air, both kids were exhausted out of their mind. In fact, Evie fell asleep in the car on the quick ride home. All in all, a fantastic day, and we look forward to next year!