As you might know, we have been experiencing some cold and snow here in Chicago (as in, weeks of below freezing temperatures combined with the snowiest 3 week stretch in the last 40 years). That, combined with some leaking gutters on the neighboring apartment building has lead to some truly staggering ice stalactites hanging over our walkway.

Now inevitably those ice chunks start to melt, and when they do, they fall. And when they fall, it pretty much sounds like the end of the world. If you got hit by one of those, you would ABSOLUTELY be utterly destroyed.

This is not the first year that we have dealt with hovering death hanging over our heads; it’s not unusual for us to hear them smashing down this time of year. When they come rocketing down they take some significant chunks out of our fence, which is why we had to replace the wooden fence with wrought iron last year. In fact, it has already happened twice this week, destroying the last remaining section of wooden fence, and breaking a few of the points off of a section of wrought iron.

However, nothing prepared us for the entire thing coming down at once! Just a giant pillar of ice and death, toppling into our yard at 1:30 am!

Now, so far, it doesn’t look like much. However, allow Sara to lead you on a tour through our backyard…

Some of the ice chunks were too big for me to lift. I can’t stress enough how much this would have killed me if I had been outside!

As you can see, it took out the internet and (unused) phone cable. I don’t know how it managed to not take down the electric cable; it must be made of sterner stuff! But I did call the electric company anyway, and it turns out it was, in fact, damaged, so it’s a good thing I called them! (they already came out and fixed it up)

So long porch that was just redone 2 years ago! So long compost bin! So long walking casually down the walkway without a care in the world, not even thinking about a casual smiting from above!

See below for some of the gory details:

You can see here that the downspout was completely packed full up with ice.

Even though we’ve caught a bit of a reprieve over the past few days, the last couple of weeks have been pretty rough, temperature-wise. We knew, of course, that our big, old, drafty house would probably struggle a little bit in the winter, but as this is the first full winter we’re going through in the house, we hadn’t yet gotten the full experience.

Granted it was record setting cold, but our furnace just couldn’t keep up. It was running nearly constantly (20 1/2 hours one day!) and it could barely manage to creep the temp over 60. It’s the first time I’ve ever seen the furnace running in a house while the temperature continued to go down!

Upstairs was actually pretty comfortable (with the exception of Ollie’s bedroom), but it was a little hard to hang out up there with people over. And in retrospect, you could tell the cold was on our minds, since all of our Christmas presents for each other were things like slippers, long underwear, and heated blankets!

If nothing else, living in this house has taught me some things about Victorian England. NO WONDER they were always wearing a shirt and a vest and a jacket and a top hat and a bustle and fifteen other layers! NO WONDER they went to bed with a long nightgown and a cap on their head.

NO WONDER THEY DRANK SO MUCH TEA!

In any case, we’ve done a lot in the last few days, and I think we’ve gotten it under control (doesn’t hurt that it’s suddenly 50 degrees warmer!). Plastic on some of the worst windows seems to be the main thing, combined with new space heaters, new comforters, wearing long underwear around the house, draft things under the doors, heated blankets, going to bed by 9 pm…

Is winter over yet?

Now that it’s snow season here in Chicago, I am officially to the point that I’m leaving a sweater and comfortable shoes to change into in the office.

Getting old is kind of funny. I mean, I didn’t set out to be this way, it just happened. I wear boots to walk the kids to school, but I don’t want to wear them all day. I get cold, I need a sweater.

On the other hand, one of the best parts about being an adult is that I don’t have to put up with anything. If I’m cold I don’t have to do some macho crap about wearing shorts in the winter to prove how tough I am, I just put on a sweatshirt.

Anyway, this was just all a long way to say that right now I am wearing slippers at work, and that’s called “winning”.

As you may have noticed, we in the midwest are experiencing a few…weather difficulties. So far this week we’ve gotten ~20 inches of snow, 30 mph winds, and we’re currently experiencing windchills down to -50 F.

The National Weather Service says: “A prolonged period of dangerously cold and potentially life threatening wind chills will occur through Tuesday morning,” and “This will result in frost bite and lead to hypothermia or death if precautions are not taken.”

Of course, the government also recommends the citizens of Chicago should, “Store a good supply of dry, seasoned wood for your fireplace or wood-burning stove”, so it’s possible their recommendations are not exactly up to date.

We’ve been inside since Saturday evening, and the kids are starting to go a little stir crazy (the cat is currently paying the price for that). Unfortunately, our house is not the most air-tight of structures, so we’ve closed off as many vents as we can and turned the heat down to avoid the furnace running all the time. Consequently, we’re all wearing triple layers (including long underwear!) and huddling together under blankets in a few rooms like it’s the end of days. Oliver and I even wore our winter hats during lunch yesterday.

On the other hand, it’s kind of fun, and we all get to huddle together under blankets like it’s the end of days. Lots of tea and book reading and puzzles and scone baking going on around here, with some possible knitting in my future. We even re-activated Netflix!

I did go outside to make sure I could get the car started and down the alley, just in case school really is back on tomorrow like they’ve been threatening. However, just when I was about to try my luck, a 4wd van got stuck right at our parking lot. After spending 20 minutes getting him out, I decided the Fit didn’t have a chance and went back inside. All my fingers and toes seem to be intact (though it was touch and go for a little bit on the fingers…I warmed them up in my mouth).

Stay warm everyone! In another 5 months we’re all going to look back on this an laugh… 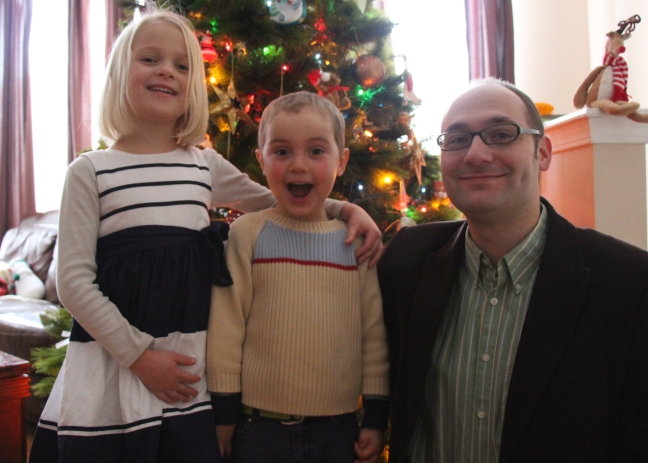 Me and the kids, ready to see the Nutcracker 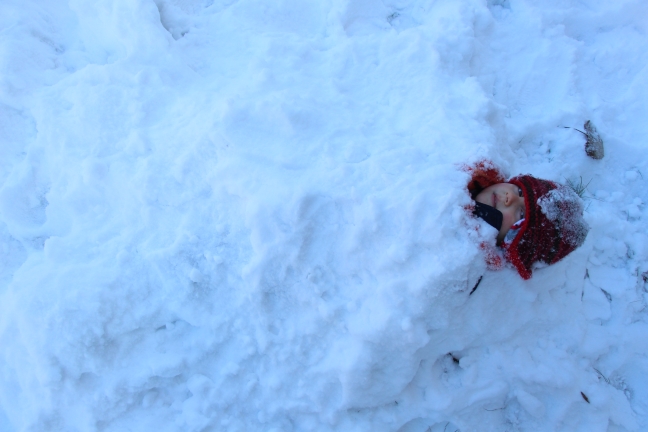 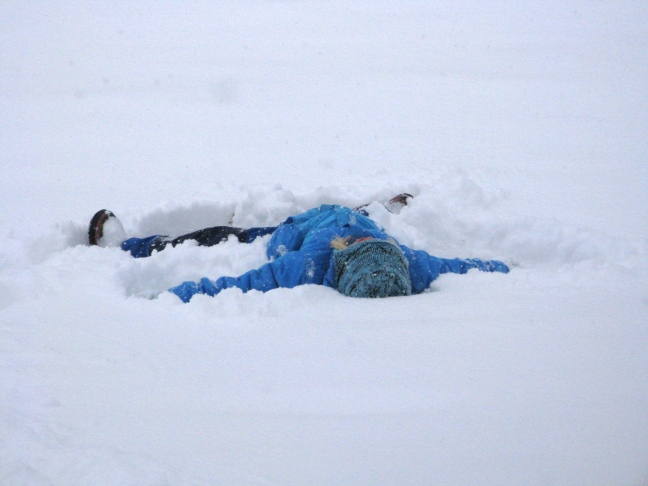