For me, these things are mostly an annoyance, but I have taken a couple of runs at them over the years and been unable to solve them after varying amounts of work. However, they drive Sara kind of crazy.

So “getting someone to fix the stove” has been in the back of my mind as a backup Christmas gift for years, but I’ve never actually arranged it. Then, a couple of months ago, I got a message from Sara’s friend Jackie:

“For an early Christmas present for Sara, please hire someone to fix the stove burners before Christmas.”

Now, I was a bit suspicious of this, because why would this person even know about the stove burners, much less decide to send me this message out of nowhere? SUPPOSEDLY, Sara had mentioned how badly she wanted them fixed when she visited back in April, and Jackie had CREATED A CALENDAR APPOINTMENT to remind herself to tell me!! I wasn’t 100% sure whether Sara had just texted Jackie and said, “Tell Shane to fix the stove”, or whether Jackie really had the foresight to hear this, note it down, and follow up 6 months later (knowing Jackie, this was totally in the realm of possibility), but either way, seemed like I should just go ahead and get the stove fixed.

On the day of, I took the kids to school as normal and didn’t mention it to anyone, with my plan to sneak back home after without anybody knowing and wait for the repairman. I thought ahead enough to turn off the security cameras, but I realized the smart garage door would notify to Sara’s phone. “Oh well,” I thought, “she’ll probably never notice, and even if she does, that thing glitches all the time.” Except LITERALLY THE SECOND THE GARAGE DOOR OPENED Sara texted me, “The garage door just opened.”

“Huh, that’s weird,” I texted back, “Oh well, looks like it’s closed now…” All day long she kept texting me things like, “Oh, make sure you bring that package home from work,” and I’d say something non-committal like, “Oh, you know, I’ll bring it home someday this week!” To which she’d reply something like, “No, you need to bring it home today.” At some point I thought to myself, “CLEARLY she knows that I’m not at work and this is some kind of TEST to see how far I’ll go before I break and admit it AHHHHHHHHHHHHHHHH!”

Proving that I should never ever try to get away with anything, because I am not equipped to handle it, and am the worst, weirdest liar on the planet.

No problem, I thought, I only need to make it through the day. By the time she comes home tonight, this will all be fixed up and I can explain what happened and we can all have a laugh! Oh we will laugh and laugh!

Finally the repairman arrived and I explained the situation with the burners, what I had tried so far, and finally saying that I think the sparker things needed to be replaced on both burners. “Did you clean them?” he asked.

Now, I understand that this is the appliance repairman version of, “Did you try turning it off and turning it back on?” which means, not only are they required to ask, but they are also required to not believe me when I say, “Yes. Multiple times.” So he proceeds to get out his wire brushes and clean them again. For about 30 minutes. After which he stands back, wipes his brow, and goes, “Man, they’re still not working.”
“Yeah, I already tried that. So, um, anyways, as I said, I think that the sparker things need to be replaced on both burners…”
“Wow,” he said, shaking his head incredulously. “You’d have to take the whole thing apart to do that.”
“Yeah, I know. That’s…that’s why I wanted to hire someone to do it.”
“Well, I don’t have time to do that today. You’ll have to call and make another appointment.”

NOT TO BE DETERRED, I spent some time looking at it after he left, and I quickly realized the reason the constantly sparking burner was constantly sparking was because there was a gas flow problem (and a poor burner design problem) that was causing the flame not to light in the little area next to the sparker. So, simply by adjusting a little screw, I could let a little more gas in and, voila! Flame stays lit, clicky clicky goes away.

THANKS FOR NOTHING APPLIANCE REPAIR PROFESSIONAL!

However, that didn’t change the fact that the other burner still didn’t spark, and replacing the sparky thing would require taking the whole thing apart, something which I had already explicitly decided I didn’t want to do myself, but I certainly wasn’t going to hire THAT company again.

And when I say the whole thing had to be taken apart, I mean THE. WHOLE. THING. Front, sides, back, a part on the bottom for some reason??? 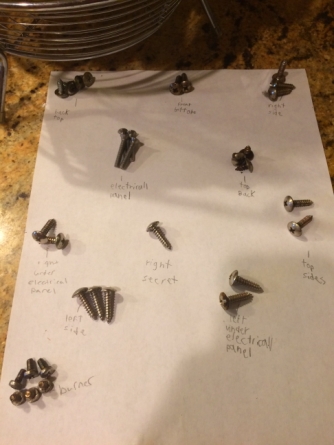 So after about 3 hours, I ran into a little problem in that, in order to complete the final step and disconnect the burners from the top, I was going to need to buy a tool that I didn’t have. As I kind of sat there in despair, I happened to notice that inside the front panel, on the burner that wasn’t working, there was some sort of little switchy thing that was cracked. Sure enough, I swapped it for the one of the other ones that was functional and it worked! Which was great, because, 1) hooray! I knew what the problem was and how to fix it, and it didn’t require leaving the stove lying in pieces all over the kitchen! And, 2) the three hours of work I had spent disassembling the stove was all for naught! And that kind of troubleshooting is they kind of expertise that you might get by HIRING AN APPLIANCE. REPAIR. PROFESSIONAL.

That’s not to say we didn’t have our fun when we were taking the stove apart. Like the time when Ollie came running over and accidentally kicked a pile of screws under the stove. Would have hated to miss out on that part!

Okay, but, don’t get distracted by the little things, I knew what I need to do. A quick trip to Ace Hardware followed by a longer, more frustrating trip to the appliance parts store, followed by a quick trip to Amazon.com and soon our replacement part (a microwave door switch? Why a microwave door switch??) was winging its way to us across untold miles. And when it got to us, just days before Christmas, it was just a simple forty-five minute job to get it replaced and fully functional again!

And that is the story of the most effort for the least impact of any Christmas present I ever got for anybody, but I didn’t murder or yell at anybody, not even that time Ollie kicked the screws under the stove, which is a goll dang Christmas miracle.