Evelyn had activities late one night, so I was upstairs with Ollie when Sara and Evelyn got home. I found out later that Sara was emptying her bag when something ran out onto her arm. She wasn’t sure what it was, so she flung it off in disgust, and only when she saw it scrambling on the floor did she realize it was a mouse.

That’s when the screaming started.

And it didn’t stop until I had run all the way downstairs thinking that someone had broken in and was actively abducting Evelyn. I couldn’t think of anything short of home intruder / murderer that could cause that much screaming. (Spoilers: it was Sara screaming, not Evelyn, but Evelyn still stayed up on a chair for about 30 more minutes just to be safe.)

There is nothing more worry-making than a mouse in your house, so of course I practically covered the floor with mousetraps. However, I’m guessing this must have been some kind of escaped University of Chicago laboratory mouse, because it was a *genius* at snatching little bits of chocolate out of the trap without setting it off.

I even bought this:

So you can see I was really doing everything I could to catch this guy, but to no avail.

“Use peanut butter!” everybody said, so I dutifully put peanut butter in all of the traps and reset them. However, the second I put those out, it was suddenly no longer interested in my traps. I thought somehow it was smart enough to know that the peanut butter would spell his doom (U of C lab mouse), until I found this:

Ahhhhh, I see. This was a HIPSTER mouse, who was turning his nose up at my peanut butter in favor of avocado! (“Well of course it’s a Millennial,” said my co-worker, “why do you think it’s staying in your house? They can’t afford their own.”)

I probably could have switched to locally-sourced almond butter, but I just wanted this thing out of my house. As we all know, the best way to get rid of a hipster is to convince him that our house has become “cool” with the other mice. Nothing repels a hipster faster than something becoming mainstream. Therefore, I set up a little stage dressing: 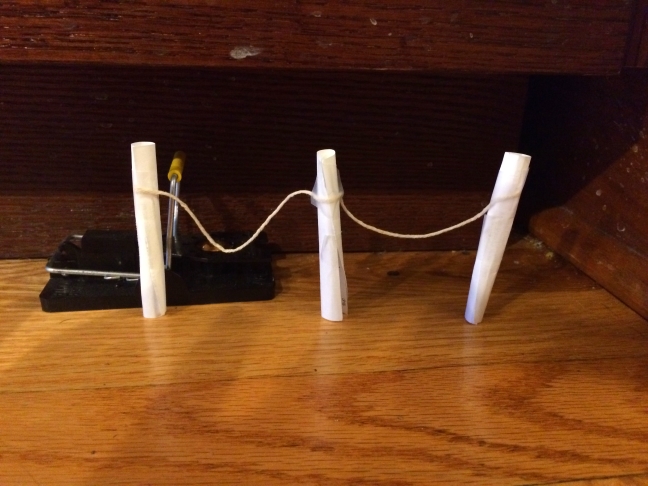 I was quite confident we’d seen the last of our little buddy, but no, I guess I didn’t fool him. (ESCAPED U OF C LAB MOUSE!)

Well, no worries. Now that I knew I was dealing with a hipster mouse, I knew just the enticement I needed to lure that little bugger in! 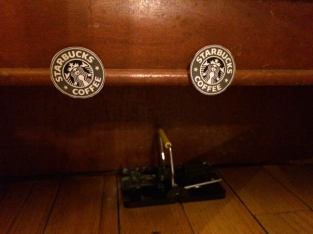 I am happy to report that that hipster has canceled his last cable subscription! (I guess technically it could have been the beard and moustache wax, but I’m hoping not to need to conduct a scientific study on which hipster mice prefer…)

“Let’s hope he or she did not help make baby mice before his premature death,” said my mom, but I’m not worried: Millennials are having kids later and later these days. Now I just need to take all the signs down really fast before I lure any more hipsters to the area…those hipster mice can smell a new Starbucks location a mile away!