So, we kind of sort of went a little crazy at the farmer’s market the other day: 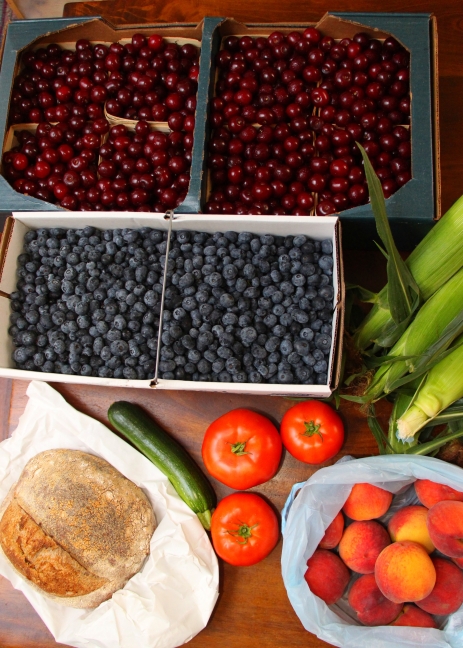 Most of that food is already long gone, including the cherries, which have mostly been canned for future cherry pies. That part was pretty awesome.

Less awesome, was the part that came right after.

I was carrying all of those berries (you’d be surprised at how much 8 quarts of cherries and 5 lbs. of blueberries weighs!), so I gave my keys to Sara to let us in the house. Sara, doing what she usually does, set my keys down…somewhere. After taking the picture above, we went right out the back door to head over to the garden.

Sure enough, locked out.

It is SO FRUSTRATING to know that your keys are just right there on the other side of this stupid little lock, and if you could just…turn it really fast, or shake it around a lot or maybe BURN THROUGH WITH YOUR LASER EYES POWERED BY THE HEAT OF YOUR RAGE, you could just grab those keys. But you can’t.

What you can do is start calling locksmiths.

This is a surprisingly disappointing endeavor. The first 4 or so were closed, busy, didn’t answer, or wanted to charge $300 to do it. (“You know,” said Sara, “it only cost us $100 to replace that window when it broke. I’m just saying.”)

I finally found someone who said they could be out in 25 minutes, with a base price of $60. Perfect.

Yeah, 25 minutes turned into 2 hours, and, despite the fact that it took him about 5 minutes to open the door, the “base price” somehow didn’t apply to our situation. Something about the smell of desperation making it cost more, I don’t know.

So they told me it was going to be $150, but I talked him down to $120 (and why wouldn’t you, when you just tricked someone into paying you double?). So that guy makes about $1440 an hour, apparently. Good work, if you can get it.

Anyway, the kids couldn’t stay put for 2 hours, so Sara walked them to the bookstore and back while I twiddled my thumbs. As far as they’re concerned, this was all good fun and makes for a great story to tell everybody they see.

3 thoughts on “Locked Out”