Ah, spring is in the air, and that means a young man’s mind turns to thoughts of bacon.

Our turn to host once again, and I think the food went pretty well. I kept feeling guilty, like I didn’t spend enough time planning things out. I think this was a combination of, 1) this is year 3, so we kind of know what we’re doing, 2) I spread out a lot of the planning over the course of the last year, and 3) we did some recipes that we have made before, which shouldn’t be viewed as a bad thing, since we know they are good recipes. 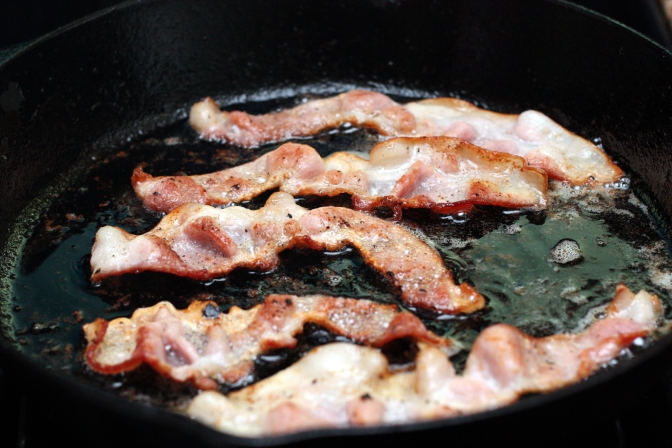 Kale with Bacon and Cannellini Beans 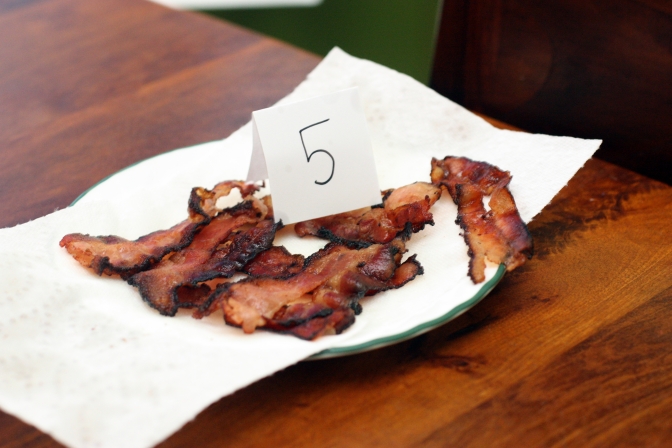 There were no heart attacks, so as far as I’m concerned, that’s a win!

The bacon can get a little overwhelming, but I didn’t think it did this year. I’m always on the lookout for “bacon related” recipes that don’t actually involve bacon, such as the “bacon and egg” pretzels and the piggy-shaped pancakes (harder to come by than you might think). Also, our recipes that did involve bacon also involved a lot of other healthy(ish) ingredients. I think this was the first year that I didn’t really feel like a bloated pig (no pun intended) at the end of the day.

The day was broken up with music class and swim class, and Oliver in particular had a hard time leaving the festivities. However, these seemed like minor distractions and didn’t take away from the hours and hours spent watching Evie’s puppet shows and plays. We didn’t have any bacon related activities this year (no Kevin Bacon movie), which is maybe kind of a bummer in retrospect, but we were pretty busy all day so I don’t know when we would have fit it in.

And not one person commented on our matching shirts while we were out and about! This is especially strange to me since I practically always get a comment when I’m wearing one of my baconfest shirts around.

I must admit that we did not actually eat the roasted chickpeas and bacon until the following day. The idea was to eat them that night while we played a couple of rounds of Pandemic, but, as usual for the evening of baconfest, nobody was hungry. So we ended up making it for lunch the next day. The good news is, we did manage to keep the swine flu from taking over the world (to say nothing of the bacteria-resistant chlamydia!). I think I’d take a game of Pandemic over watching a movie any day. Lots of fun!

Baconfest is always a fantastic time, an excellent tradition, and full of delicious, bacony goodness. Evie is absolutely convinced that it is a national holiday, right up there with Easter and Christmas. I have to admit, I probably enjoy it more than a lot of other holidays!