Evie has been doing a lot of writing lately. They say a writer writes what they know… 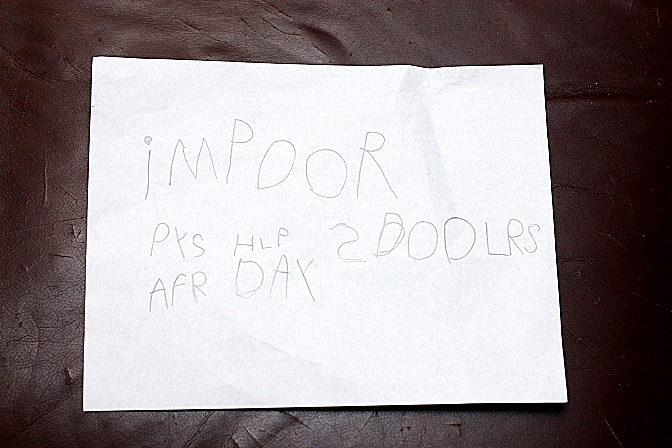 I think a lot about the kids growing up in Chicago, and what a different life they’re going to have. We see a lot of “picnickers” (as we like to call them) in our neighborhood. Homeless people and panhandlers are just part of Evie’s surroundings. Normal.

On the way to Evie’s school, we go under a highway overpass. Beyond the fence is what can only be described as a homeless shanty town. There are mattresses and semi-permanent structures, even a grill. In the limited time that we spend at that intersection a few times a week, we’ve seen a lot of activity. Homeless people climbing in and out through gaps in the fence. The one homeless guy who sits on the corner every morning and takes in tons of cash, food, and cigarettes. Seriously, we sit at that light for a few minutes, max, and in that time he probably takes in at least $20, every day. When he gets food he puts it in a community pile for other homeless guys to pick through. One time we even saw the members of the community furiously shoving mattresses out under the fence on one side as the police were coming in on a raid from the other side.

Evie hasn’t asked me many questions about all this, considering. However, I know it weighs heavily on her mind. Obviously, given the picture. I don’t really know what I’d say to her. “Be compassionate about your fellow man, but ignore these ones and don’t make eye contact.” How do you explain that? I’m not even sure how I feel about it myself.

So, long story short, if you see Evie panhandling on the street, please help her out. No reason we can’t put her learned skills to good use.