Evelyn and Oliver had their tap recital over the weekend, the second for Evelyn and the first for Oliver. They did great! In fact, as a special surprise, Evelyn received an award from the dance school for “hardest worker”! It was a total surprise for all of us, including Evelyn. (In retrospect, it said her name in the program, but we hadn’t read that far.)

I am so proud of them, especially Oliver because he adamantly does not like to perform and he worked *so hard* on this, especially going into the final week.

So, without further ado:

(In case you just can’t get enough, last year’s video can be found here.)

Evelyn had her first piano recital over the weekend, and she did great. She has been taking piano for a couple of years now, but we have been pretty low key about the whole thing and this is the first time she has performed.

When she sat down afterwards she just gave me the BIGGEST smile.

I have to tell you that there is almost nothing the kids can do that makes me as happy as to hear them playing piano. Evelyn has long ago eclipsed my own musical ability, and Oliver is pretty close. When I see them playing it’s just like magic. Absolute magic. I often just laugh out loud when they’re practicing because it seems so crazy that their fingers are doing these things. How are their fingers doing these things!

I love it. I want them to never stop taking piano.

Evie is still loving ballet, and was very excited about her big performance (although possibly not as excited as she was about missing swim class). This being her second year, she was even less phased than last year. I can definitely see her improvement, and the way she does the different moves and poses really starts to look like a ballerina.

If nothing else, she certainly has the smoldering look down: 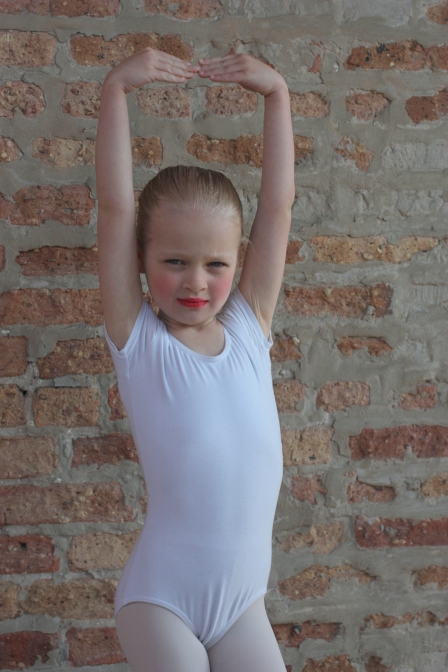 This year, Sara volunteered me to help out backstage. I was more than a little nervous about this especially since I normally have no involvement with ballet whatsoever, so I had no idea what I was doing. Not to mention the fact that I would undoubtedly be the only daddy involved, so any stupid mistakes would only be magnified. I felt like I was representing my entire gender. My volunteer duties covered both the actual performance and the dress rehearsal, for double the fun.

However, the whole thing was a breeze. The kids pretty much take care of themselves at this point, so we really only needed to help them with their costumes and herd them in the right direction. Sara gave me tissues and lipstick to take in my pocket (I’m told all the best backstage mommies have lipstick in their pocket), and I managed to be Johnny-on-the-spot with both items, impressing several actual backstage mommies (thanks for making me look good Sara!)

For the actual performance, I couldn’t have had a better seat. I was just offstage, maybe 10 feet from the action. It was so much fun to see Evie performing. She just absolutely nails everything, with her usual meticulous attention to detail. You can see in the video that she is exactly on beat with the teacher on every step. One of my favorite parts of the video is right at the start of the free dance, about 2 minutes in, when Evie launches into it before anybody else even moves. I know she’s been thinking about this for a long time and practicing, so it was nice to see all of her hard work pay off.

Evie is such a little ballet teacher. When we were backstage, she was stressing over when we were going to go, warming up, and making sure everybody was lined up properly in the correct order. She was assigned to be the “caboose”, perhaps to make sure everybody in front of her was doing the right thing. Well anyway, that’s the way Evie took it, and she planned to do her job properly.

You’ll see what I mean at exactly 1:02 in the video. When Evie sits down, she catches the eye of the boy across from her, and then quickly demonstrates to him on how he should be holding his arms. This cracked me up so much, because it’s just Evie in a nutshell, knowing every single piece of the performance and “teaching” everyone how to do their part. You’ll also notice at the very end, when they all line up, she quickly corrects her feet to their proper position.

So anyway, without further ado, I give you the Dew Drops:

ETA: Since I wrote this post, Evie has informed me that she’s started a “dance school” for her classmates. She has choreographed a “tulip dance” (because “our arms look a tulip when we do the circle”) and she is teaching her pupils in preparation for a performance she’s arranging on the final day of school. She demonstrated a little bit of the dance for us, and I assure you it is as fully featured as the one performed above.

Over the weekend, Evie had her very first ballet recital. She performed the frog dance. 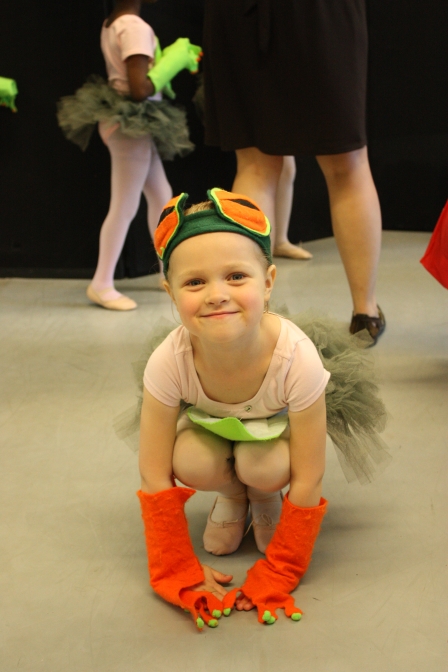 She had a dress rehearsal on Friday, which meant that I was responsible for hair and makeup that day. Eek! You have no idea how stressed out about that I was. I practiced a little, and I have to say, the ballet bun turned out much better than I expected. I didn’t go full on makeup mode, just stuck to a little blush. All in all, not nearly as scary as I thought it would be!

Evie was very excited about the recital. She didn’t seem nervous at all, and I kept wanting to ask her if she was nervous, but I didn’t want to then make her nervous by bringing it up. It seemed like it hadn’t occurred to her to be nervous. But then again, of course it didn’t, because there’s nothing she loves better than performing for a crowd.

In fact, as I mentioned on facebook, that morning she was lying on the floor crying, “I need some attention!” I said to her, “Evie, in an hour you’re going to be on a stage with a whole audience watching you.” She got this slow, luxurious, evil smile on her face that looked exactly like:

It was almost creepy. My brother saw it too, and he said it put goosebumps on his arms.

Her recital was the day of Baconfest (posts to come next week), so my brother and I wore our Baconfest shirts. I wasn’t sure if I was a little *too* dressed down (hey, the shirt was pink!), so I was nervous, but it ended up being okay. At one point I saw a dad in a Captain America tee shirt sitting in the row behind us and marked his location. Always good to know who you can count on in case trouble goes down.

I saw the costumes at the dress rehearsal, but Evie made Sara promise not to look at the pictures so it would be a surprise the day of. I thought the costumes were pretty awesome.

The day of the recital, Sara took care of the makeup and hair preparation, and (not surprisingly) she did a much better job than me. I’m not sure how I feel about requiring makeup for 4 year olds. I know it is part of performing, and part of what makes the whole thing feel special, but it had me feeling a little “Toddlers and Tiaras“, you know? 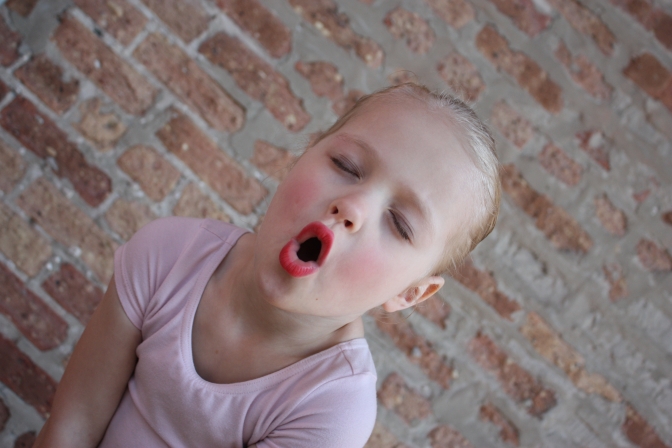 I was pretty excited to see her, but then something strange happened. Almost immediately, as soon as the first performance began, I started to get a lump in my throat (frog in my throat?). It was very strange, and unexpected. I mean, in retrospect it makes a lot of sense I guess, but it really had never occurred to me that I would get choked up. And it wasn’t even Evie performing yet, the girls on stage were like 15. Next up was a group 3 year olds and I totally lost it. I was taken completely by surprise! I looked over at Sara and she was wiping tears from her eyes too. “Are you crying?” I mouthed. Sara nodded. “Me too,” I said. The extra funny part was that I apparently got it all out of my system, because I didn’t get choked up during Evie’s actual performance.

I was pretty impressed that, through the entire performance, none of the kids freaked out or froze. Considering parents aren’t even allowed to sit in during practice, I thought an entire auditorium full might throw at least the 3 year olds. Not so. Kudos to the dance teachers!

Oliver was so proud of his big sis. He’s really excited to do ballet when he gets old enough. Evie was really on cloud nine afterwards. I bought her a flower from the farmer’s market, and she got another from her teacher. She seemed so old, with her flowers and congratulatory hugs and pictures with her friends. All in all, it was pretty awesome, and I’m glad she did an activity that she really enjoyed. It really seemed like the performance was one of the highlights in her life thus far. 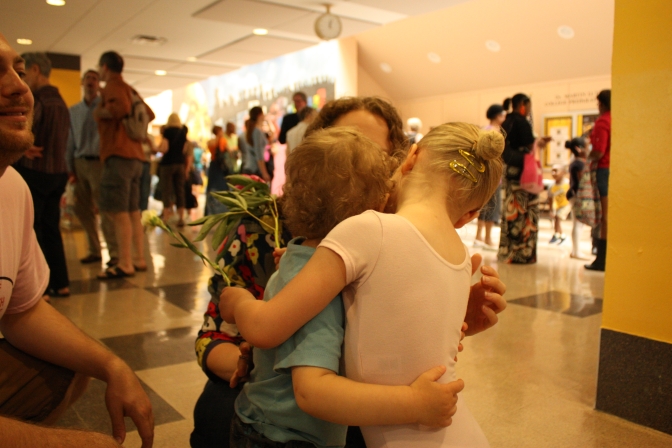