I was vaguely aware of Regina Spektor. I enjoyed her song Fidelity (If you’ve ever heard a Regina Spektor song, you’ve probably heard Fidelity), but I was mostly familiar with the song she did with Ben Folds, You Don’t Know Me. So I would say that I had vaguely positive feelings towards Regina Spektor.

My obsession began with You’ve Got Time, the theme song to the wildly popular show Orange is the New Black. I never even watched the show, but Sara did, and I *could not* get that song out of my head. Love it. I listened to it over and over again (ask either of the kids and they’ll sing it to you; they learned all the words via osmosis). I listened to it on repeat, hummed it in the shower, learned to play it on guitar.

Fidelity is a really good song that I like a lot, and You’ve Got Time, natch, but there are even better ones out there.

My current favorite is “Samson”, a beautiful love song referencing, of all things, the story of Samson and Delilah (you know, that old love story? Real sweet, those two.)

Another one of my favorites is “Laughing With”:

Okay, another, nother favorite is On the Radio. Wait, no, or The Call. Or maybe Us. Or maybe all of them?

The weird thing is that I like every one of her songs. All of them. Spotify has like 5 or 6 albums, and I haven’t heard a song I didn’t like yet. Every band has a stinker, right? I mean, you can’t like EVERY song someone writes.

Well, maybe I can. At least for today, that’s Regina Spektor for me.

I know this is an old song. So sue me.

Handlebars sounds like vintage Eminem, except instead of racism and spousal abuse, it has SCIENCE!

Aside from being catchy, the thing I like about the song is the story it tells without actually telling the story. In the beginning, achievement is met with childlike wonder. He’s proud of his ability to ride a bike with no handlebars, or take apart a remote control. His ambition is to make a comic book with his friends. Everything is so simple, but he’s happy.

However, as he goes along, the pride kind of changes into something else. Rather than being proud of what he’s accomplished, each new advance leads into a hunger for more; more mountains to climb, more feats to accomplish, more power and privilege, and more people to subjugate. The more he can do, the more his ambition grows.

As the song intensifies, it drives us forward along with him, and we see how it evolves, one tiny step at a time. He consistently describes himself as happy, but the tone towards the end betrays him. Science lets us make a vaccine that can save millions, but human nature allows us withhold that vaccine. Science lets us split a molecule for power, but human nature turns it into a bomb.

Technology is great, but if we use all that power to guide a missile by satellite, then what use is it? Is that really what the boy riding his bike with no handlebars aspired to? Though it was a journey of a thousand steps, is he really happy with where he ended up?

I highly recommend you give it a listen.

Then I suggest CataCombo, the world’s first combination catacomb and music lounge. The casket contains a full sound system “tuned to the coffin’s unique interior acoustic space” for high quality, audiophile sound. Now you will have access to your tunes for all eternity. Literally. (No word on if this can be combined with the Kiss Kasket) 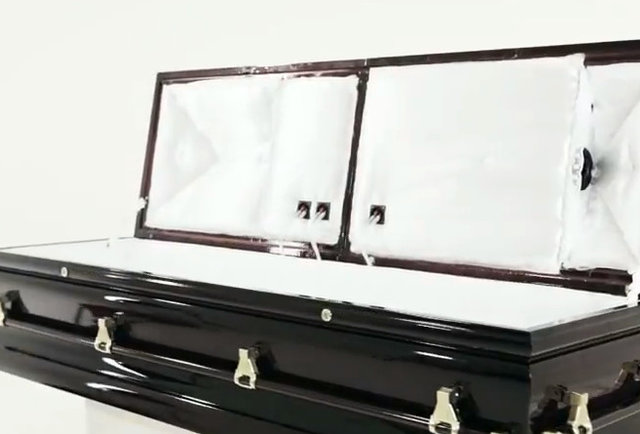 But wait! Upon further reflection this is a terrible idea.

First off, if you’re accidentally buried alive in this thing, nobody’s going to hear you. “Hey, is that Shane clawing at the ceiling of his grave, or just a fantastic bass line?” “I don’t know, but either way, let’s dance on his grave!”

Second off, the music selection can be remote controlled, “allowing friends and family to spare you a thought by adding tracks and keeping it up-to-date.” Absolutely not! The last thing I need is for my brother to clear out my playlist and replace it with Beiber for all eternity.

No thank you CataCombo! I’ll stick with the pine box after all.

So the lyrics are very story oriented, but Ben’s own style is very much storytelling anyway. So it probably wasn’t too much of a switch for him. That being said, having a literary writer definitely gives the songs a little something different. All in all, I thoroughly enjoy the album (thanks Anna for lending it to me!), and I like it better than the previous one (Way to Normal).

So, here are my 5 favorite songs on the CD, in reverse order:

5) Levi Johnston’s Blues – I’m willing to bet this is the #1 song in America about Levi Johnston (of Bristol Palin’s baby-daddy fame). Basically it’s just about how he was a regular 18 year old dude one minute, and the next minute was the focus of an entire presidential campaign (at least for a little while).

The lyric: I’m a f—–‘ redneck, I live to hang out with the boys / Play some hockey, do some fishin’ and kill some moose / I like to shoot the shit and do some chillin’ I guess / You f— with me and I’ll kick your ass*

*This entire chorus was taken wholesale from Levi’s MySpace page before it was sanitized by the political machine.

4) Claire’s Ninth – All Claire wants for her 9th birthday is for her divorced parents to get together and take her out for dinner. This song is flat out amazing. It somehow manages to capture both the sarcasm and embarrassment of being a pre-teen, and also the feelings of the parents: sort of a strange mix of regret over what happened and how it affects their daughter, but at the same time sort of oblivious to how they’re hurting her.

The lyric: Or what we were, you’re all that’s left / It used to be our birthday too

3) Belinda – This is a song about a singer who wrote a love song which became his biggest hit, the song he will be forever known for. The problem is, 40 years later, he’s not with the girl anymore and he’s forced to sing the song over and over, night after night. I wonder if this one rung especially true for Ben Folds, who’s written a love song or two over the course of his 4 marriages.

The lyric: There’s a lot of 40-somethings wouldn’t be in the world without it

2) Saskia Hamilton – The entire song is based on falling in love with the name of poet Saskia Hamilton. Seriously. The entire song is just about her name. Aside from being very catchy, the video is pretty awesome too. From what I understand, Ben Folds just contacted some dude who made cool youtube videos and asked him to make a video for the song. It turned out fantastic. The entire thing is filmed in the guy’s bedroom. This had me screaming, “Saskia Hamilton!” at odd times for at least a week.

The lyric: She’s got more assonance than she knows what to do with

1) From Above – The premise is that soul mates do exist, and we walk by ours every day without ever noticing. The song follows two such people through their lives. I liked this song immediately, but it wasn’t my favorite at first. However, after hearing a few times, the lyrics are so poignant, and the music fits them perfectly. How sad to think that each person has a perfect second half, and the vast majority of everyone will never even meet them.

The lyric: Maybe that’s how books get written / Maybe that’s why songs get sung / Maybe we owe the unlucky ones

Quite some time ago, there was a music video going around the net. The band was Ok Go, and the song was “A million ways”, A.K.A. “dancing in the back yard”.

[Edit: embedding has been disabled on this clip, so you’ll have to click through to watch. I highly recommend you do so!]

Okay, so 4 guys dancing around in their backyard for a cheep, but pretty awesome, music video. I really don’t think it would have been popular if the song hadn’t been good too.

But no big deal, videos like this go around the web all the time. However, Ok Go was no one hit wonder. Pretty soon another video came out, “Here it goes again”. This one became even more popular than the previous one, and established them as the masters of the “one scene shoot”, where they complete all the choreography without cutting the video, or editing. This video was even more awesome than the last, and you’ve probably seen it, though you might just know it as, “the guys on treadmills”.

[Edit: This one has disabled embedding as well, but if you haven’t seen it, you should definitely click through!]

This led to all kinds of things, and in particular, an appearance on the MTV Music awards, where they performed the dance live, with some awesome treadmills that said, “Ok Go” on them.

Not only is that video pretty awesome, but I really love the song. Again, I think that you can have the coolest video in the world, but if the song sucks, you’re not going anywhere. So the popularity of the video is somewhat of a testament to the quality of the music.

Time passed, and Ok Go disappeared from the radar. I don’t think anybody was really too surprised at that; that kind of Internet fame is like catching lightning in a bottle. They had managed to harness it not once, but twice, and they should be grateful, right? Wrong. Not content to fade quietly into the dark, they went out and made ANOTHER AWESOME VIDEO.

World, take note! Ok Go will not be ignored! They will continue to be awesome until you sit up and listen!