I heard a commercial on the radio the other day for Dr. Pepper 10. This is a new product from Dr. Pepper that’s not exactly diet (0 calories) and not exactly regular (7,000,000 calories). The ad campaign has sparked some controversy, since it caters exclusively to “manly men”. The commercial I heard basically lists all the most manly things, and implies that Dr. Pepper 10 should be added to that list. 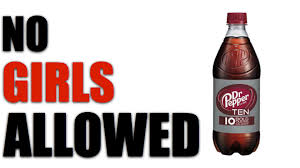 This really surprised me. Here they are using super manly He-men to try to sell diet soda to a group that traditionally considers diet soda outside of their domain. It’s certainly a good thing that men, who are traditionally allowed to be as fat as they can while simultaneously putting pressure on women to watch their weight, are now starting to realize that weight is something they need to pay attention to and be responsible for. On the other hand, the whole commercial is dripping with stereotypes and starts by saying how Dr. Pepper 10 is “not for women”. How do you manage to be both extremely sexist and gender-barrier-breaking at the same time? Or maybe they really are only being extremely sexist, because they’re really overcompensating a little bit there, aren’t they? “We know that diet drinks are inherently girly, but maybe if we surround them with pure manliness, we can trick someone into drinking it without realizing the 10 calories are from the added estrogen.”

Not only did they manage to offend women with the ad campaign, but they also managed to offend me. As a male who loves Dr. Pepper, I expected to be firmly in their wheelhouse. I began to be dismayed a little bit as every “manly” thing didn’t apply to me. Am I not man enough for Dr. Pepper? Does this mean I can’t like it anymore? (well, technically I like Diet Dr. Pepper, so maybe I was already in the “woman category” anyway)

Luckily, the last item on the list was, “If you have ever blogged about bacon…” Whew! Qualified at the last minute. I feel like they threw that one in just to include me. They might as well have added, “If you have ever answered to the name Shane Halbach…”

Anyway, here’s another ad from the same campaign. You can decide for yourself what it means: