Rather than sailing the bay on a serene sailboat, we suddenly found ourselves in the middle of a bustling city.

I have basically never been to Canada, or at least I’ve never been far enough into Canada to lose sight of the U.S. Sara and I have talked about taking short trips, but this is the first time we’ve ever actually followed through. And, of course, most of my interaction with Canadians has been with Torontonians, because like 99% of Canada lives around there.

It is, however, truly a bilingual city. Every single person speaks English. Everyone. They switch absolutely seamlessly from beautiful sounding French to the absolutely most Canadian sounding English without batting an eye. It’s kind of funny because, when I’m in another country, I feel like it is my duty to try to speak the local language. So when I see and hear all of this French, it makes me feel like I should make an effort to speak French. But English IS the local language as well, so you can just speak English without feeling guilty. It took some getting used to.

I found the trick was not to say, “Bonjour!” As I said, I thought it would be polite to go with a little French. Not so. If you open with “Hello”, you are setting the mode of communication to English. When you say “Bonjour”, you are indicating that the mode of response is French, in which case you’re asking for it, and they’ll give it to you. (Luckily, they correctly interpret the panicked expression on your face and switch to English pretty quick after that.)

We opted to rent an apartment (through airbnb again) rather than go with a hotel room. This has worked well for us in the past, and it did again. The apartment was not exactly luxurious, more like cheap student housing, but it was lovely to have a kitchen, reliable wi-fi, and after staying on the boat we felt like we were light years away from the kids sleeping in a bedroom at the opposite end of the place. The location was just alright: we were close to grocery stores and things, but not close to where we actually wanted to do things. This meant lots of walking. Each morning started with about a 1.5 mile hike. Ollie was in the stroller, and Evie managed pretty well on foot. Still, it did add a little extra exhaustion at the end of the day.

We started out with the Montreal Science Center, and the kids really enjoyed it (and free for us with our MSI membership!). It was basically like every other science museum, but there were LOTS of things for the kids to do. Also, the kids made a really cute fake news report about why cell phones are good, which was fun.

Afterwards, we went to Nudo, a restaurant in Chinatown where you can watch them make the noodles fresh for your meal. The food was PHENOMENAL! We ordered waaay too much and left there stuffed, but all of it was absolutely amazing. Certainly one of the best places we ate on the trip. As we ate, the kids were also treated to nice Chinese anime that featured skillfully drawn, lovingly crafted, wrinkly old man testicles. What’s not to love?

Next up was Notre Dame of Montreal, which was simply stunning. We spent a decent amount of time here, but honestly I think I could have spent more. The beautiful blue color was very reminiscent of Sainte-Chapelle, and there are so many beautiful, intricate little details that there was a lot to see. 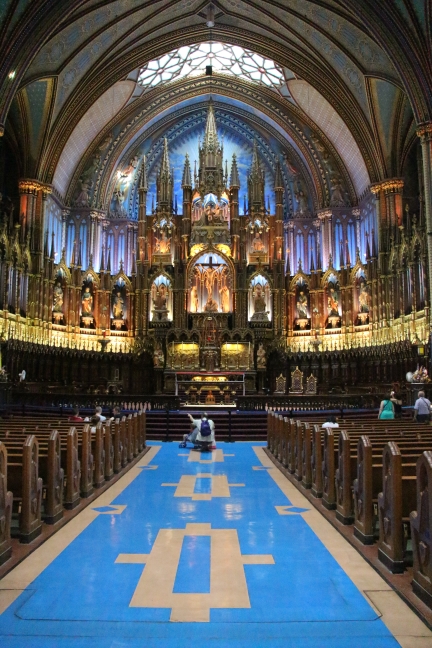 Almost better than the church itself, was the Bubble Man, busking outside.

This is the most brilliant street performance-esque thing ever. His only materials are soap, water, some sticks and string, and he entertained a veritable horde of kids for hours. The kids had such a great time that obviously we were more than happy to toss him some money. I’m guessing that, despite all the things we did that day, this is the one that the kids remember. 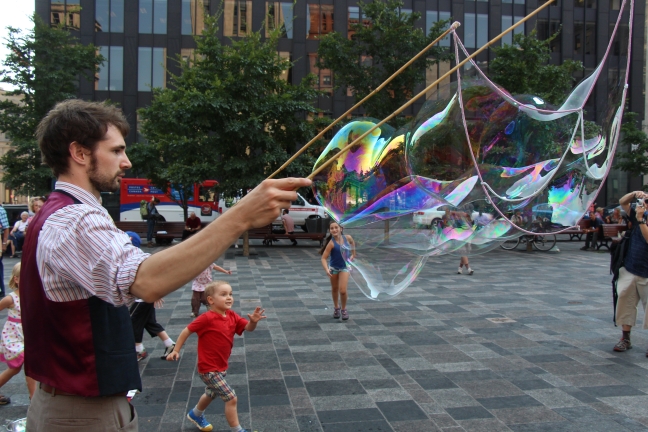 The next day we went to Pointe-à-Callière, which is a museum that is sort of about the history of the city of Montreal. I kind of wish we went here first, because I knew next to nothing about Montreal, and this was very helpful as a sort of backdrop to the city. It was fascinating to see world events through a similar, but different viewpoint than the typical U.S. position. In particular, I was enthralled by their almost completely opposite treatment of the First People (Native Americans, er, Native Canadians). How different to not have this huge calamity of disaster and suppression of people in your history.

Next, Sara wanted to head to the Jean-Talon Market, which is the most massive ridiculous farmers market I have ever seen. Now, as ALWAYS happens in situations like this, Sara tells me we should go do something and I think, “Farmer’s Market? That doesn’t sound fun.” And then I am TOTALLY PROVEN WRONG. Not only was it an awesome market, but they also had excellent food and we ate like kings. In particular, we had awesome crepes and some amazing tiny pork tacos. We also purchased three kilos of honey. THREE KILOS OF HONEY. (That’s more than 6 1/2 pounds for us non-metric types. 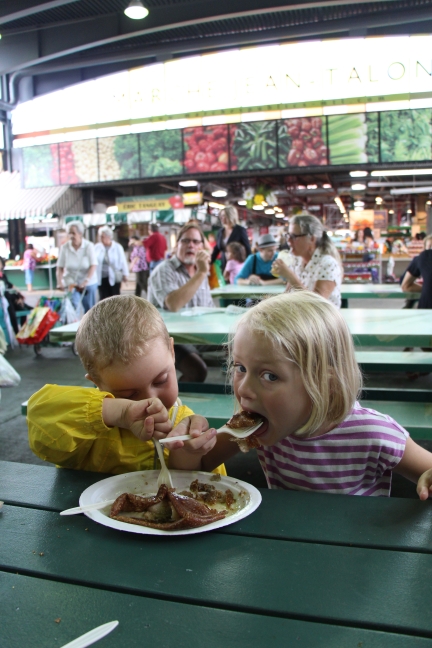 Our next stop was the Musee Des Beaux-Arts. The museum itself was alright, probably not as good as the Chicago Art Institute (and yes, the tiny stairs were annoying). I guess I’m a little spoiled when it comes to art museums; it’s probably not fair to compare it to Paris, or Florence, or London. And to be fair, we were in and out pretty quick, because Ollie was getting pretty squirrely by that point. But it was certainly well worth the price of admission, which is free.

To be honest, there weren’t a lot of “Montreal!” places that I wanted to visit. Think about it, can you think of any big thing to do in Montreal? What is the “true Montreal experience”? Mostly it just kind of felt like Generic City Setting #4. We found lots of lists of places to go, but I had no strong desire to do any of them. So we did what we usually do in situations like this: we resorted to eating.

We got some really good falafel from Al-Taib. 2 falafels for $5! I would eat here 3 times a day if I lived in Montreal. But for some reason, nobody liked it but me.

We got fancy cupcakes and ice cream from Les Glaceurs. I loved all of the marzipan cupcakes in the window with the camping or outdoor themes.

We ordered a ton of bagels from Fairmount Bagels. We tried the mueslix, whole wheat, and multigrain. The whole wheat was by far the best, and everybody was fighting over them. I think the other two were a little sweet, and that didn’t go over quite as well. If I had it to do over again, I would have gotten more savory bagels, but we ate these things for breakfast, lunch, and dinner, so no complaining.

Finally we ate at Olive Et Gormando, and it was AMAZING. We only went for breakfast, but I think this was the best food of the trip. The pastries were to die for, but I didn’t have nearly enough “Poached egg on your face” panini, and I would have gladly traded my apple pastry for it. The kids had so much chocolate brioche that they couldn’t walk, and Evie couldn’t even stomach chocolate for a day or two.

Evie spent some of her own money to buy a little plastic bug holder. It was CLEARLY the best souvenir money could buy, and there will be a separate blog post on it at some point.

Sara and I drank a lot of Tim Hortons coffee in Canada, and it kind of spoiled us I think. Tim Hortons is basically Canadian Dunkin Donuts (I know I’ll never get any Canadian readers with THAT sort of talk), and they are everywhere. It seems a little commercial for my tastes, but damn if that coffee wasn’t addictive! The first time I got McDonalds coffee when we got back in the U.S., I wanted to spit it out.

Evie really, really wanted to find some Canadian money, so she scoured the ground with her usual dedication. At home she finds money probably every single day, but in Montreal she never found a single cent. Not a penny! Every day we walked around the city and she kept her eyes glued to the ground. Nothing. And then we eventually found out that Canada doesn’t have pennies anymore! They don’t use them! (And believe it or not, it actually works just fine.) They also have $1 and $2 coins, so I guess people just need to be more careful with their change over there. Either that, or the multitude of homeless people we saw are just faster than a 6 year old.

Actually, funny story about the pennies. On the very last day, when we were on our way out of the country, we decided to use up the last of our Canadian money on gas. We had $22.95 left, so Sara said, “Aim for maybe $22.85, and we’ll have a few cents left over for the kids to keep.” So what do I do? $22.97. What could I do?? I did not have enough Canadian money to cover it! Would they lock me in Canadian debtors prison? (Actually, I bet Canadian debtors prison would be extremely pleasant).

I grabbed a handful of American pennies and brought them inside. “I’m really, really sorry,” I said. “It’s all I have. I’ll pay you extra to make up for it!” “No worries,” said the guy behind the counter, giving me a strange look. “It’s only 2 cents over. We round down.”

Overall my impression of Montreal is sort of mixed. It had the gritty feel of a big city, but it didn’t feel like there were that many people, especially kids. Where are all the kids hiding? Everyone was *extremely* nice – despite the French, they are still Canadian. The metro was really easy to use. The food was fantastic.

I guess I would say the interesting part was really the French. It made it seem like we were a lot farther from home than we really were. So in the end, Montreal is like a cheaper, easier trip to Europe.

If nothing else, I saw the greatest license plate of all time: 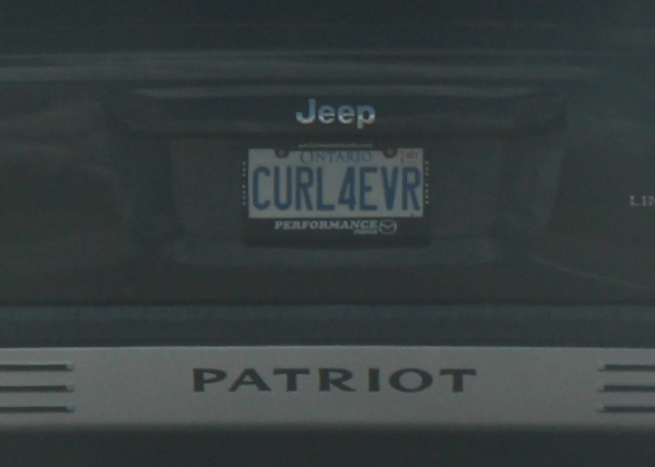 And that is what I did with my summer vacation, by Shane Halbach.