We had been putting off going to the grocery store as long as we could. We had planned to go on Thursday, then put it off until Friday, and now it was Saturday. Sara made a whole plan: go first thing, wear gloves, don’t bring our reusable bags, be prepared with lots of hand sanitizer. We even had a “food quarantine” area set up for when she got back.

Except, when she went out to get in the car….nothing. Turns out one of the kids had turned the dome light on the last time we had used the car, and as we hadn’t used it in a few days…

Needless to say, our plan was out the window. The car didn’t even have enough juice to unlock.

Sara and I pushed the car out of the garage and into the alley, which required a very excited (though very nervous!) 6th grader to drive the car: 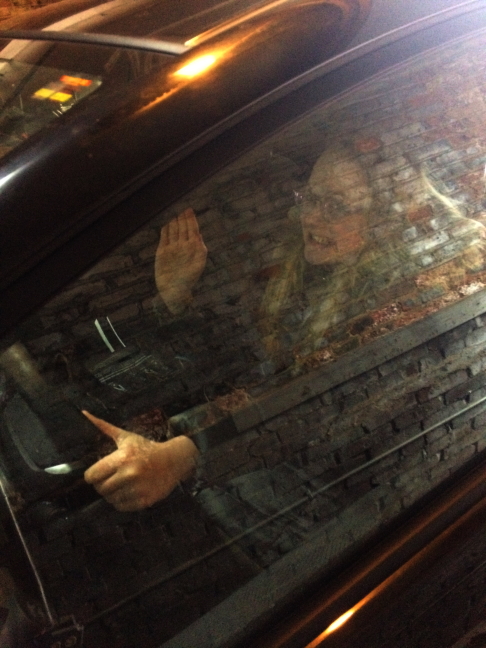 We called a friend to come and give us a (n appropriately socially distanced) jumpstart (thank you AGAIN Lois! What would we do without you??), but after 10 minutes (in the rain) the car still wouldn’t start. 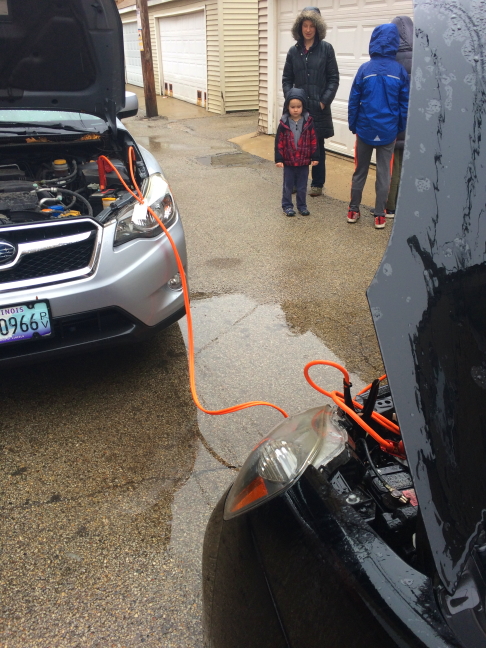 So unfortunately we had to push the car over to the side of the alley to get it out of the way; back to square one.

But as it turns out, we live right around the corner from an O’Reilly’s. I gave them a call and it turns out they had a battery tester / charger that you can use for free! (but not free of charge GET IT?!) So I took out the battery and carried it over to the store (those things are heavy). They took my name and number and promised to call me back when it was done charging.

Except it didn’t charge in an hour. It didn’t charge in two hours. Eventually, the machine agreed with the writing on the wall: the battery was kaput. (I don’t really understand this, as it was a new battery, less than a year old, and the cause was quite evident, with the dome light still in the “on” position! But whatever, at this point I just wanted to get my car out of the alley!)

So I walked over and bought a new battery, and carried it home (did I mention, those things were heavy?) but when I got it back and wrestled it into place, it turns out it was the wrong size, and wouldn’t fit. So I carried it BACK to O’Reilly’s, exchanged it, and carried the new battery back home (like SUPER, SUPER heavy).

Finally, about 5 hours later, we had a working car!

NOT to say there weren’t a few hiccups along the way. I had been ready to sing the praises to the high heavens about O’Reilly’s, but the extra trip back carrying the wrong battery cooled my ardor a little bit. And then there was discovering that you have to have the key turned when you reconnect the battery or else the horn just blares as loud and as long as it can, or the fact that our radio is now locked in some kind of security mode and won’t turn on, but hey! It disrupted our lives about the minimum it possibly could, and cost less than $200 (so help me those kids better never so much as LOOK at that dome light switch again).

Even in a weird, quarantined world, we had a weird day.

Afterwards we went for a drive to make sure everything was working (we had originally planned to do this once we got the battery jumped, to make sure it was charged, and even though we had a new battery and didn’t really need to do that anymore, it still seemed like the thing to do!), and we drove downtown.

I was kind of expecting to see a creepy empty wasteland, but (unfortunately) that’s not what I saw. Sure, the tourists were gone and traffic was *great*, but there were still LOTS and LOTS of people out and about.

Hang on to your butts, folks, this is going to get worse before it gets better.