As previously mentioned, my story “Grant My Powder Be Dry and My Aim Be True” is now available for purchase for Kindle as part of “Anthology I: A Collection of 8 Science Fiction & Fantasy Short Stories“.

Check it out, drop a review on Amazon, leave a comment. Still not convinced? Read a sample of my story below!

GRANT MY POWDER BE DRY AND MY AIM BE TRUE

The man opened his eyes, blinking up at tall, green pines stretching up in a circle around him. He sat up and looked around. He was sitting in the middle of a blackened bowl, the sides sloping up away from him on all sides. The light was fading, and the forest was completely still. No animal sounds broke the silence.

The man could remember nothing before that moment. Had he been at the center of an explosion? Had he fallen from the sky and made the crater himself?

He did not see anything that he might have owned. No clothes were scattered around him, no horse waited to explain how he had gotten there. No weapons were at hand for his protection, and no equipment or evidence of artifice could explain an explosion. He did not appear to be hurt; in fact, he felt strong and whole.

He stood and carefully picked his way out of the crater. The sloping earth was warm and pleasant against his bare feet, and forest sounds gradually returned as he climbed. When he was out, the man stopped and looked around the small clearing. Whatever had occurred had damaged many of the trees, their broken branches aromatic with pinesap.

The man had no reason to walk in one direction over another, but he knew he was not content to stay still. He turned until the direction felt right and started off, ducking under branches and stepping over logs. Sap clung to his feet, covering the pads with a coating of pine needles.

Perhaps he could find a stream to follow to a village. If people were nearby, they may recognize him and explain what he had been doing in the forest.

For about a mile, he wandered in whichever direction he felt like going. By then darkness had well and truly fallen, allowing him to see the glow of a campfire directly ahead.

He approached with no stealth, walking into a small clearing. Branches had wedged between trees on one side, accumulating moss and leaves to make a wind break. Someone had erected a small tent next to this, and a fire burned cheerfully despite the fact that no one was there to tend it.

The man walked to the tent, thinking to check if anyone was inside. As he paused to listen for breathing, someone stepped behind him, wrapping one arm around his bare chest and holding a short sword to his throat with the other. His assailant was shorter than he was, but the sword extended their reach. The blade felt cool against his neck.

“Why in Skel’s good graces don’t you have any clothes on?” she asked amiably.
The man looked down at himself, as much as he was able with a sword pressed to his throat.

She laughed once in disbelief. “You’re telling me you forgot your clothes?”

“I forgot a lot more than that.”

She continued to circle around until she had put the fire between them. He finally got a good look at her.

She was quite a bit shorter than him, with clear brown eyes the color of polished wood. Her chestnut hair was scandalously short, not even touching her shoulders. She wore light armor, with a leather breastplate over red padding and small bracers and greaves on her arms and legs. She wrinkled her brow as she looked at him, trying to decide what to think.

“Aren’t you cold?” she finally asked.

He shrugged. “Not really.”

“What are you doing out here?”

“I was hoping you could tell me.”

“I don’t remember that either.”

Her wrinkled brow pulled down lower as confusion gave way to anger, but she went to her tent and returned with a man’s shirt and breeches, tossing them to him. They were hopelessly small.

“That’s all I’ve got, and it’s a lot better than nothing.”

The man tugged on the pants and pulled the shirt over his head. The pants fastened easily and the sleeves extended all the way to his wrists. She looked from his face towering over her to the bottom of his pant legs, just brushing the forest floor.

“You must be smaller than you look,” she mumbled, puzzled. 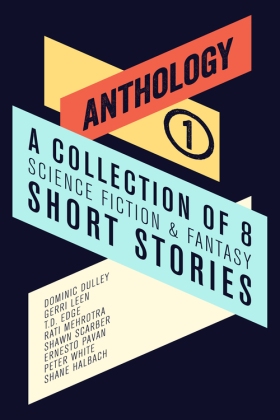