Here we see our two contenders, ready to once again revive that age-old Thanksgiving day test of skill and determination: the potato olympics.

Tools are selected and the competitors are ready to begin.

What’s this? A paparazzo has actually climbed a ladder outside to get a sneak peak at the peeling event in progress!

Despite an extremely serious wound, this competitor soldiers on. Not even blood loss can prevent him from completing the event. 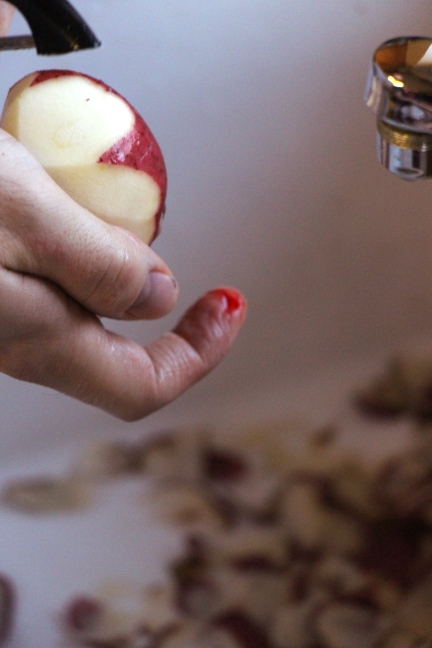 After multiple bandages are applied to various parts of the hand, and the sobbing children have been escorted from the room, the competitors prepare for the third and final round; the cutting event. No more accidents please!

After a laborious and scientific judging system is enacted, the score is all tied up! Who will win the coveted bragging rights?

Based on a last minute steal of an opponents potato, swift cut, and subsequent taunting dance, a style point is awarded to Rachael! It’s all over folks! It’s all over! In a surprising finish, Rachael has taken the victory for the 2013 potato olympics!